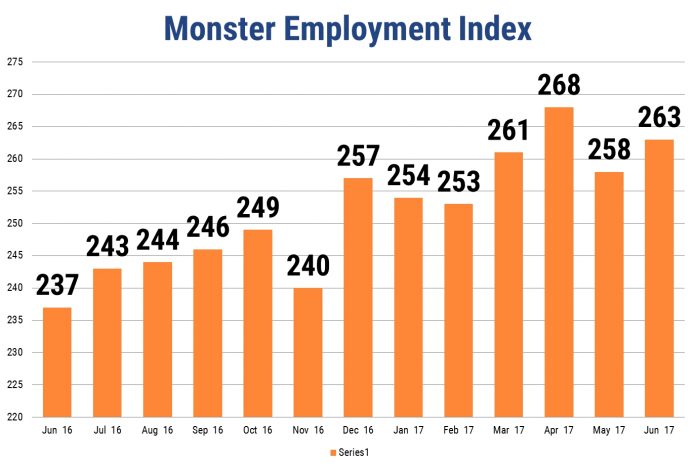 The City of Joy may be lagging behind in terms of job opportunities, but the online recruitment scene seems to be catching up in the city. Kolkata has recorded a 40 per cent growth in online recruitment in the last one year, as per Monster.

The Monster employment index also suggests a spurt in online recruitment activities of 11 per cent (YoY). Of the 27 industry sectors monitored by the Index 20 sectors saw increased demand (YoY).

Among industries, the BFSI sector has been witnessing progressive growth on an annual basis since April 2017 and it tops among the list with a 44 per cent (YoY) increase in online recruitment. This sector has had a 21 per cent growth in hiring since last three months from March to June, 2017.

In the IT sector, year-on-year, hardware and software saw 13 per cent growth, while BPO/ITES were down by seven per cent. This negative growth in BPO/ITES is the first  since April, 2014. This decline across month-on-month is six per cent, three-month is nine per cent and eight-month is six percent.

In the retail sector, month-on-month growth in demand was 12 per cent up from – 20 per cent, which is the most notable increase among all sectors. The year-on-year growth improved from -14 per cent to -1 per cent in June, 2017.

In the automobile/ancillaries/tyres sector, the growth year-on-year was up four per cent from a 16 per cent annual decline in May, 2017.

Demand in logistics. Courier/ freight/transportation was down by two per cent. The demand in production and manufacturing was down by 22 per cent, which is the lowest year-on-year decline.
In the e-commerce sector, recruitment witnessed eight per cent growth between June 2016 and 2017.  Month-on-month, demand increased by one per cent and exceeded the three-month and six-month level by nine per cent and 11 per cent respectively.

Occupation trends
Year-on-year online demand in nine of the 13 occupation groups monitored by the Index saw an increase.

The most notable increase in demand year-on-year was of sales & business development—28 per cent. In May 2017, the growth rate was 17 per cent, which increased further by 11 per cent.
The software, hardware, telecom and hospitality & travel professions saw increase in demand by 23 per cent. These are the next most sought-after job roles.

For customer service professionals, the demand moderated up to 14 per cent in June 2017, compared to 28 per cent in May 2017. These changes are in line with the reduced demand in the BPO/ ITES sector.
Legal saw the most prominent annual decline among all monitored sectors. It saw a downfall of five per cent. The job role saw a nine per cent growth in demand month-on-month.

How to increase ROI on job advertising