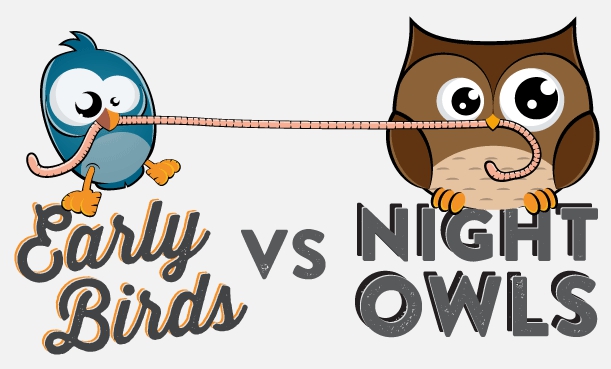 The results of this Attention Network Test could challenge the education system and human resources management in certain areas.

26 good sleepers were made to undergo the Attention Network Test at two different points of time — first at 8 a.m. and then at 2 a.m. The volunteers were made to stay awake for 18 hours in between (8 a.m. – 2 a.m.), during which they also adhered to their normal routine.

The test revealed that the early birds completed the tests quicker than the night owls, but the latter took a more serious approach, spent more time and paid more attention during their favourite hours, which is late evening or night. The night owls preferred to sacrifice speed for accuracy, while working late at night.

At night, early risers demonstrated a quicker reaction time when solving unusual attention-related tasks than night owls, but these early risers made more mistakes along the way.

Andriy Myachykov, who conducted this research along with Nicola Barclay, says, “An interesting fact is that although night owls spent more time finishing than early birds, their accuracy in completing the task was higher.”

Interestingly, the researchers did not find any important differences between the results of the ANT test the early birds and night owls completed in the morning, but the evening test showed a more pronounced contrast.

The study showed that sleep deprivation and a relative increase in the time spent awake negatively impact the brain’s attention system.

Myachykov explains, “To deal with the most difficult test — resolving a conflict of attention — it was necessary not only to concentrate on the main visual stimulus, but at the same time to ignore accompanying stimuli that distract from the core task.”

The results of this study could challenge the education system and human resources management in certain areas. For pilots, air traffic controllers, drivers, etc., attention, the ability to deal with large sets of data, and reaction time are all very important. During emergencies, these features could play a vital role. The results of this study could also be very useful for people who work night shift.