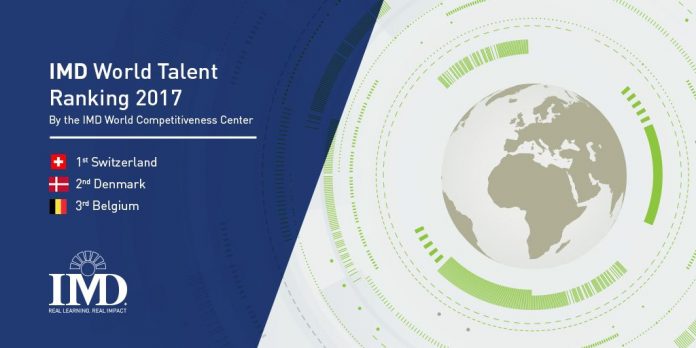 Out of the 63 countries surveyed in the IMD World Talent Ranking 2017, India stands at 51st position, three places better than last year.

Despite the Skill India mission and PM Modi’s vision and efforts in the talent-building space, India has a lot to catch up with in terms of where it stands in its talent competitiveness, as compared to the rest of the world. Out of the 63 countries surveyed in the IMD World Talent Ranking 2017, India stands pretty low at rank 51, which is three places better than last year, yet not too significant as compared to the world economies.

The annual IMD World Talent Ranking assesses the methods countries use to attract and retain the talent their businesses require to thrive, and it seems India is not doing too well in capitalising on its rich demographic profile. On the other hand, European economies are far superior when it comes to attracting, developing and retaining top talent, with 11 out of the 15 most talent-competitive economies based in the continent. Switzerland, Denmark and Belgium remain the most competitive countries, respectively, this year.

The IMD World Talent Ranking is based on the countries’ performance in three main categories — investment and development, appeal and readiness; and India ranks 62, 43 and 29 respectively on these aspects.

Arturo Bris, head of competitiveness, IMD Switzerland, is of the view that India is not doing a good job at retaining local talent and attracting foreign labour. Not only are remuneration levels, quality of life, security and property rights a deterrent to domestic employment, but investment in education remains weak relative to other economies. India ranks among the bottom five countries on the list in terms of investment in education as a percentage of GDP, the study found out.

India loses out to neighbouring countries, such as Republic of Korea (39), China (40), Thailand (42) and Indonesia (47). In the Asian Subcontinent, Philippines jumped 10 ranks from last year and took up the 45th rank, ahead of India, while Brazil is the only BRICS country that lags behind India at 52.

The study marks that it is the European countries’ outstanding education systems that set them apart from the rest of the pack. On an average, each has a high level of investment in education accompanied by a superior-quality educational system, from primary to tertiary levels. This allows them to develop local talent and at the same time attract foreign, highly-skilled professionals, which many European businesses rely upon to perform.

One look at the specific contributors to talent competitiveness, makes it evident that India needs to work on improving upon various metrics under investment and development, appeal and readiness. The total public expenditure on education is currently only three percent of the total GDP, although India’s rank is decent on the apprenticeships (21), which has a score of 4.94 on a scale of 1–10. In addition, despite the increasing focus on awareness around employee training and development, India ranks 51 on employee training, with a score of 4.98 on a scale of 1-10. Despite focussed efforts in the area, and organisations also investing heavily on the gender diversity agenda, women constitute only 23.19 per cent of the total labour force in India.

India really lags behind in terms of quality of life, ranking 55 with a score of 4.23. This is also one of the reasons behind the continuous brain drain and less attraction of foreign skilled professionals. On the other hand, effective personal income tax rate (percentage of an income equal to GDP per capita) is one of India’s strengths at rank 17. There are some other positive indicators as well under readiness, with labour force growth and finance skills, both at rank 17, skilled labour at 25, availability of competent senior managers at 20, science in schools at 21 followed by management education at 25 and language skills at 26.

In line with the indicators, Bris also recommends that India should emphasise on the education system as a key to prosperity, and prevent brain drain by providing better opportunities to local talent.