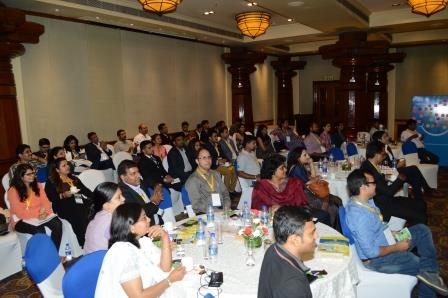 For HR to make people happy or to measure happiness, understanding these four chemicals – dopamine, oxytocin, serotonin and endorphin – and their importance in steering moods is very crucial.

Happiness may be subjective. It cannot be bought, but did you know it can be induced? Well, this was proven in a case study presented by Ravishankar B, CHRO, HCL TalentCare, at The Happiness Conclave held by HRKatha on the April 29 at the Taj Vivanta, Bengaluru.

The idea seeped in when Ravishankar was taking a session on human behaviour at the ISB, and one of the students asked why HR does not implement what is taught in human behaviour and neural science; and is crucial to human happiness. That made him ponder upon various HR practices and policies and their impact on employee happiness.

According to neuroscience, happiness is a pleasant feeling. There are three states of mind —happy, unhappy and neutral. One can’t be continuously happy but happiness can be managed by providing a planned and controlled environment to people, as work environment is one of the biggest factors that makes people happy or unhappy. For a productive organisation, it is important to have happy employees. Employee happiness certainly matters more than we know. So, to explain how to manage happiness at work, Ravishankar began by describing the four hormones/chemicals produced in the human body and that determine the happiness or unhappiness of individuals. They are, dopamine, oxytocin, serotonin and endorphin.

Moodometre is an app through which employees could choose a smiley between happy to sad, and rate how they feel about various aspects such as their boss, team and project. Capturing data from the same, the sadness-creating areas were picked and then HR interventions were planned accordingly.

For HR to make people happy or to measure happiness, understanding these four chemicals and their importance in steering moods is very crucial. Organisations have various programmes, policies and practices for employees, but it is important for HR to see which chemical it is triggering. Since the first step is to keep track of the mood of the employees, in his previous organisation he created an application called the moodometre where employees could choose a smiley between happy to sad, and rate how they feel about various aspects such as their boss, team and project. Capturing data from the same, the sadness-creating areas were picked and then HR interventions were planned accordingly.

Ravishankar explained each chemical one by one, starting with dopamine. He said that anticipation triggers its production. For example, a free goodie in a shopping mall or a complimentary dessert makes people happy, as it’s a reward that they get without putting in much effort. The same effect is created when people get to enjoy surprise treats at work. He shared that he always tried to convince the management to organise parties for employees, as work tends to stress them out after a point producing more endorphin (which when produced in an unbalanced way can create stress and depression).

According to Ravishankar, “The most common cause of unhappiness amongst Indians is commute time”. Therefore, in order to reduce the stress from commuting, he devised a unique solution—they partnered with a radio channel to play in the office from 8.30 to 9.30 in the morning. Employees could call up and ask a question or dedicate a song to a colleague or boss. The programme became so successful and popular that the employees began requesting for access to music during work hours, so that they could enjoy music alongside their tasks.

The second hormone, oxytocin, which is present in all mammals, makes them social. It makes people feel happy in a group. So how does HR create social bonding in an organisation—to trigger oxytocin— especially when workplaces are distributed across geographies and team members are scattered across locations? The answer is, technology. It has enabled people to connect on various platforms. Ravishankar revealed how they had created a corporate social network where employees could connect and collaborate with each other and join communities of their interest, be it religion, adventure or anything else.

Moving on to the third chemical, serotonin, Ravishankar stated that it comes from two concepts – either by helping create self-worth for an individual or by creating a status for them. Serotonin is also produced through a feeling of achievement, and achievement is all about publicity. “People like to exhibit”, he said. To provide a platform for people to showcase their achievements, Ravishankar introduced a group reward and recognition programme, which went beyond the norm of managers rewarding and recognising employees. Based on the concept of frequent flyer miles in an airline, every employee is assigned a certain number of points credited at the beginning of the year. Over the year, these can be given to anyone including self —no questions asked. As the employees gain points they move to a new status. This resulted in a rising set of high performers as people wanted to collect more points.

To provide a feeling of self-worth, he also created a value portal where people could share suggestions about their work with others, and in turn, feel valued by others. As a natural human tendency, people like to extend advice on how to do things better and they feel valuable in doing so. Also, people feel worthy when they see other people follow them. It gives them a status and a sense of achievement.

Further, he shared that according to neuroscience, the brain cannot survive in a disengaged state and can go into depression in such a situation. However, volunteering can counter the same. Studies have shown that volunteering provides a huge amount of happiness to people. Any activity like taking care of a dog or a child or any other volunteering activity produces wellness chemicals in one’s brain. Keeping that in mind, Ravishankar started looking at CSR from a happiness point of view. In his previous organisation, he started a community project called ‘Make a difference’, where employees could voluntarily contribute one rupee a day from their salary. The contribution made by them was matched by the corporate. The employees themselves decided how or for what cause that money would be spent. By the time he left that organisation, they were collecting a good Rs 17 crore per annum from this voluntary contribution of a rupee a day. The chairman was so happy that he doubled the contribution.

The fourth chemical, endorphin, which provides ‘power’ is needed when one wants to work hard or meet a target. It also gives the strength to withstand pain. Ravishankar rightly explained how a lot of work in the organisation can be a pain for an employee and how HR can help them withstand the pain. To help create endorphin to fight stress, he introduced a social wellness programme, wherein within a month around 70 per cent of the employees were getting involved in some social wellness activity, challenging each other with new wellness goals and appreciating the achievements of the same.

How does HR create social bonding in an organisation—to trigger oxytocin— especially when workplaces are distributed across geographies and team members are scattered across locations?

Similar to customer experience management he also started a digital and gamified programme called ‘employee experience management’. Ravishankar said, “We did that for the 360 degree feedback, where we created avatars for individuals. For example, if someone rates his boss or the CEO as Ravana, then, to find out the reason behind this rating, we would have them play a game where they have to kill Ravana. The number of times they kill an avatar would show what they think about him or her. This game became a hit.”

Ravishankar stated that the performance appraisal is another agonising exercise for most employees. So, they introduced a ‘performance journal’, where employees recorded their achievements for a day/month/quarter, and the manager then shared his remarks on a daily/monthly/quarterly or annual basis. This not only provides people an avenue to tell their boss about their accomplishments but also forces the boss to give a regular feedback. This, in turn, kills the annual performance appraisals.

As the audience took in the recipe for the happiness-creating chemical cocktail, Ravishankar concluded by saying that, “it is possible to use the four chemicals to make people happy or at least to ensure they are in a neutral state of mind, rather than unconsciously introducing only endorphin/pain into the system”. 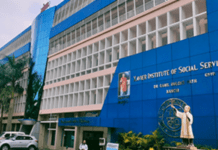 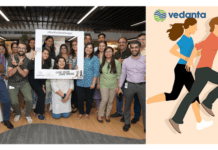 NETAP and India Apprenticeship Forum together host discussion on leveraging the...

Can we put happy customers and happy employees on the same...