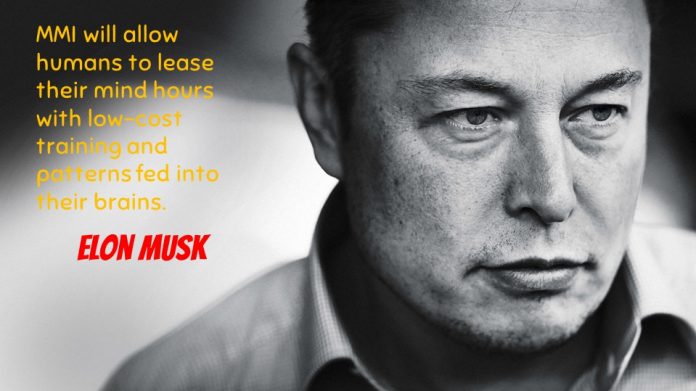 Tesla founder, Elon Musk, predicts that MMI will allow humans to lease their mind hours with low-cost training and patterns fed into the human brains.

Elon Musk, founder of Tesla Inc. made a prediction last week in Dubai that in future employment will require only one qualification—a functioning mind.

Calling the new workforce mind-workers, he shared how MMI will allow humans to lease their mind hours with low-cost training and patterns fed into their brains.

Musk predicted how human resources will demand a premium and instead of technology replacing human labour, they will now become enablers of broader employment.

This will ease out economic challenges, such as low productivity and labour market polarisation.

Direct, lag-free interactions between our brains and external devices, and the ability to create ‘neuroprosthetics’ will allow us to communicate complex ideas telepathically or give us additional cognitive (extra memory) or sensory (night vision) abilities.

MMI have been useful in enabling communication for people who were previously unable to speak to loved ones. They have also been beneficial in providing vital warning signs to people with epilepsy.

According to Musk, with MMI, human resources will demand a premium. As mind-based communication becomes a reality, MMI will open doors to new types of relationships. For instance, feelings and thoughts can become commodities for exchange and purchase, leading to new media and entertainment industries.

Musk has recently launched a company called Neuralink Corp., which appears poised to join the medical device market for implants designed for injured or diseased brains.

However, experts believe that there is still a long way for Musk’s predictions to turn into reality. There are several questions that need to be answered.

How will an electrode array record the brain’s many wandering thoughts? Even if it manages to capture them, how will it decode / identify the important ones? And will a human brain even be able to process whatever the artificially intelligent network sent back?

“It’s a long walk from moving a prosthetic limb with the motor cortex to plugging a healthy brain into a smartphone,” a tech report states.