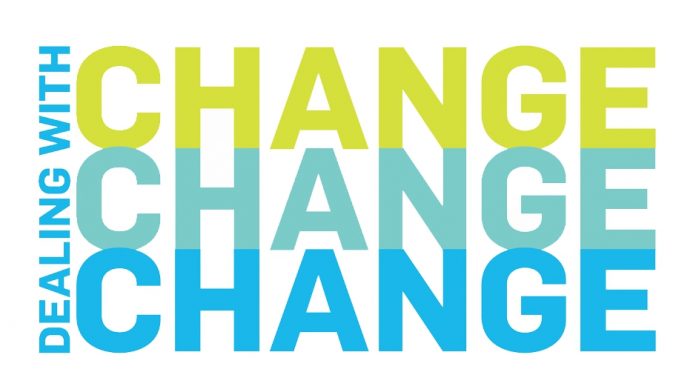 Regardless of when you read this, who you are, what you do, your age, or your position— you have suffered, are suffering or will suffer from a change initiative. You will at least initiate a change. This is what the cliché, “the only constant is change’ is trying to communicate. We are steeped in change.

Given that the cliché is true, that change is unavoidable, it makes some sense to gain a deeper understanding of the change process. It is especially true if we are trying to change our organisations, departments, teenage children or our communities. With this in mind, here is an overview of a minimalist eight-step methodology:

I
Understand some basic change concepts
We do not respond randomly to the possibility of change to our existing situation. There are behavioural patterns that we follow almost robotically without thinking. If I were to walk into your office and tell you to do, what you’re currently doing, ‘differently’, your immediate (and predictable) response would be to ask me, “Why?”

What is unreasonable is for me to be surprised by your response, or for me to consider that response a form of insubordination or intransigence. This is just one of many predictable responses to change. The more of these we’re aware of, the more ability we have to implement change with a greater chance of success.

Gaining this basic knowledge of how we tend to respond to change is neither difficult, nor costly. While there are hundreds of books on the subject, I’d suggest starting with The Diffusion of Innovations authored by Everett M. Rogers, published by Free Press.

There’s a Chinese proverb that sums our opportunity to learn from the experience of others very nicely, ‘To know the road ahead, ask those coming back’.

III
Establish rapport
Rapport is vital to ‘trust’, and the more trust we have, the easier it is to change. I ‘trust’ some of my doctors and will follow their advice without question. The ones I don’t trust have a difficult time convincing me to do anything. This seems obvious — but it isn’t obvious enough based on the tales of failed change in many organisations.

Rapport with the audience we’d like to change is necessary if we are not to be perceived as untrustworthy outsiders. If we are perceived in that manner, then our ability to be ‘agents of change’ is severely compromised.

IV
Understand existing status quo
To change a thing, is to destroy a thing. This concept was succinctly voiced by Pablo Picasso when he stated, “Every act of creation is first an act of destruction.”

Change always destroys an existing status quo. One of the most commonly stated reasons for a change failure, is that change was dictated by the upper management who had no clue what was happening on the shop floor, and how their mandated change would negatively affect the operations.

Simple question for anyone contemplating a change within their organisation—Which child is more likely to learn how to ride the bicycle with a minimum of fuss and bother?

I’ve never met anyone who did not know the correct answer to this question, but the insight that enables that correct answer seems to vanish when we are working with organisational change.

The psychological situation is exactly the same regardless of whether we are talking about children or organisations. We are far more likely to embrace a change when it is our idea, than when it is someone else’s idea. The challenge for us as ‘change agents’ is to figure out a way of ensuring everyone’s involvement; making it their idea; getting others to demand a change — rather than us insisting they change.

VII
Reinforce new behaviours
When someone does something good, then we’d like them to do it again. So, we throw them a ‘cookie’ — we recognise the change in behaviour and reward it in some manner. We thank them, we provide time off, we promote them, we pay bonuses. We know this process of ‘behaviour modification’ works, we use it all the time. When our children ride 10 feet and then fall off their bicycles, we don’t chastise them, we applaud their failed efforts to achieve the elusive goal of balancing on a moving object.

If you’re already doing this as part of your change initiatives, atta boy! You’re doing it right! (did you see what I just did there?)

VIII
Create closure
Change is always going to be a difficult process — learning new skills takes effort and in the process, we fall off the bicycle a few times. At the end of it all, a celebration is in order. At the very least, it’ll give people a push to embrace the next change we inflict on them.

The 6D framework of HR analytics