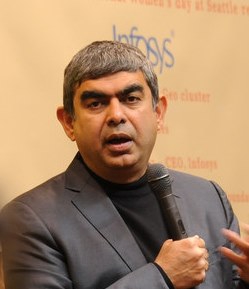 CEO Vishal Sikka,who has taken the company to new heights with a promising future ahead, will now receive a raised compensation of $11 million.

Infosys has just stepped out of its popular reputation of a paymaster that followed the spirit of social equity. N R Narayana Murthy’s philosophy of compassionate capitalism takes a backseat, giving way to new remuneration rules as the CEO and other senior leaders receive a salary hike.

While the company grew in terms of revenue by 9.1 per cent, reaching $9.5 billion this fiscal, it also outgrew NASSCOM’s industry average of 12.3 per cent in terms of constant currency (considering account currency fluctuations) as it saw a growth of 13.3 per cent. Taking into account these numbers compared to that of the last few years, it goes without saying that CEO Vishal Sikka has taken the company to new heights with a promising future ahead. This certainly justifies the new hike Sikka has earned, which will take his compensation to $11 million.

Official reports shared that the $11 million package includes a base salary of $1 million, $3 million in variable pay, $2 million in restricted stock units (RSUs) and another $5 million in stock options, which would be awarded to him based on Infosys’s performance. Sikka previously received up to $5.08 million as annual salary, along with a stock option of $2 million totalling to a package of $7.8 million. Along with the salary raise, the company also extended his term by two years for up to 2021.

Sikka’s salary raise was also followed by a revision in the remunerations of a few other senior leaders. As per an official report, the company promoted three executive vice presidents as presidents — Sandeep Dadlani, head of Americas, Ravi Kumar, chief delivery officer and Mohit Joshi, head of financial services. Although Infosys did not reveal the compensation of these executives, sources said it was around $2 million including stocks and long-term incentives. While this comes as a move that goes a little against the company’s preliminary beliefs, it surely sets a benchmark in the industry supporting fair pay for the high performers.

How Pinteresting! $20,000 employee benefit for surrogacy