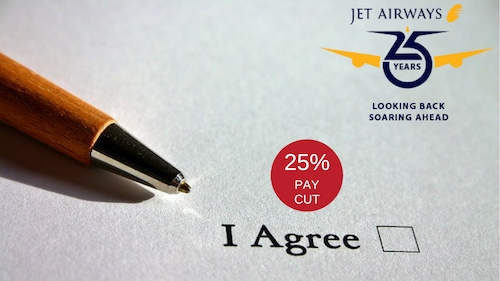 The Airlines is in a financial crisis due to rising fuel costs, falling rupee and increased competition for market share.

Call it irony or sarcasm, Jet Airways has a great offer for its employees on its 25th anniversary—a 25 per cent salary cut!

The Airline has 16,558 permanent employees, including 2000 pilots, in addition to over 6000 temporary workers.

Although the employees have not been officially intimated about the salary cut yet, the management—including the chairman, the CEO, deputy CEO and the chief people officer—has been talking to several unions and senior employees, urging them to accept the offer.

The Airline has proposed a 25 per cent salary cut for a period of 24 months.

However, employees, specially the pilots, have refused to accept this salary cut. One of the unions for pilots has threatened mass resignations if this salary cut is forced upon them. Around 80 per cent of the pilots are affiliated with the union, the National Aviator’s Guild.

The engineers’ union has also rejected the offer.

One good news for the pilots is that the Airline has waived off the seven-year bond that first officers were required to sign before joining.

Jet Airways, in which Gulf-based Etihad Airlines also has 24 per cent stake, is apparently in a big financial mess. The carrier is left with only enough revenue to run for just 60 days. The rising fuel cost and the falling rupee have added to its woes.

If the salary cut is not accepted, several ground staff and cabin crew will lose their jobs in the coming days.

The management also told its staff that the Airline’s subsidiary, JetLite, will continue to run as a separate entity, sustaining its operations with five aircraft.

People continue to leave their jobs in the US

Emirates to give out full salaries to employees from October