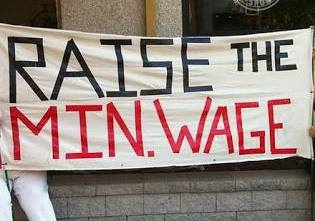 The minimum wage for unskilled workers in the capital will increase from Rs 9,568 to Rs 14,000.

This Independence Day, Delhi Chief Minister Arvind Kejriwal announced that the minimum wages in Delhi will go up by about 50 per cent even as he urged Prime Minister Narendra Modi to implement this throughout the country.

As a part of his speech at the Chhatrasal Stadium on India’s 70th Independence Day in Delhi, Kejriwal said, “Those who have less in life should have more in law. So we have decided to increase minimum wages in Delhi by about 50 per cent.”

“The gap between the rich and the poor increased due to the way previous governments functioned. The rich got richer and the poor became poorer. Now it is our government’s responsibility to improve the lot of the poor through policies like this” he added.

The Delhi CM expects this move to not only improve the living conditions of workers in the capital but also to boost the economy on the whole. He also requests other states to go in for similar reforms.

Vinod Rai, head HR (supply chain & vendors), HR transformation leader, ?Maruti Suzuki India says, “The decision to increase minimum wage by 50 per cent may come as a challenge for some industries at present but may also prove beneficial in the long run. The demand and supply of workers affects organisations and their costs as the supply of labour in India has always exceeded the demand. That is why companies have been able to control worker costs significantly. This is also one of the biggest reasons for the existence of rigid labour unions and conflicts between the unions and the management on issues concerning wages. If you look at the government’s decision for wage hike with a futuristic lens, it will only result in worker satisfaction, better living conditions and lesser conflicts in the long run.”

However, the industry had a different view on the same. Federation of Indian Chamber of Commerce and Industry had earlier written to Delhi Labour Minister, Gopal Rai, saying that a 30–40 per cent hike in minimum wages may lead to shifting of several industries from the national capital to neighbouring states. The industry body also argued that the proposed hike in minimum wages will ‘severely hurt’ the growth of micro and small enterprises in the national capital, and hence, the AAP government should reconsider this proposal.

Top performers of Infosys get 20-25% increment

Now an integrated portal for benefit of pensioners