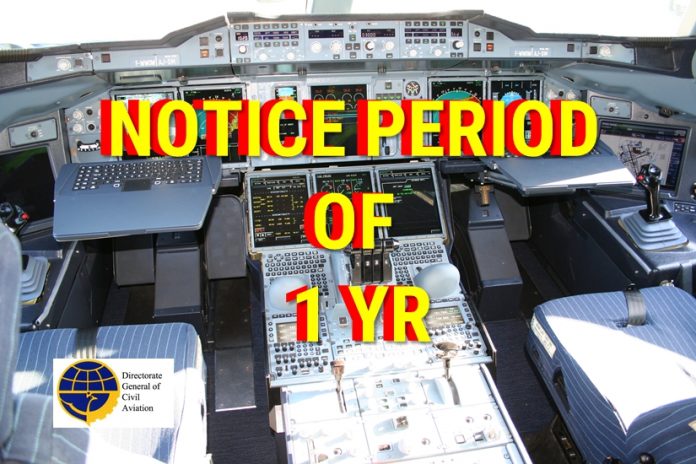 During the notice period, neither shall the pilots refuse to undertake the flight duties assigned to them nor shall the employer deprive them of their legitimate rights and privileges with respect to the assignment of duties.

Senior pilots will now have to serve a notice period of one year and co-pilots for six months, after they put in their papers.

Announcing this change, DGCA (Director General of Civil Aviation) says in an official communiqué, “During the notice period, neither shall the pilot refuse to undertake the flight duties assigned nor shall the employer deprive the pilot of legitimate rights and privileges with respect to the assignment of duties.”

“Failure to comply with the provisions of the CAR may lead to action against the pilot or the air transport undertaking, as the case may be, under the relevant provisions of the Aircraft Rules, 1937,” it adds.

At the end of the notice period, it will be mandatory for the airline to issue an NOC (No-objection certificate) failing which it shall be liable to penal action by the DGCA.

DGCA has also said that the airline will have the right to reduce the notice period if it wishes to do so.

The notice period can also be shortened in case the airline brings in any change in the terms and conditions of the employment to the disadvantage of the employee pilot, during the notice period, such as reduction in the salary or perks. In such cases, the pilots can demand an early release and the airlines will have to oblige.

DGCA observes that pilots were resigning without providing any notice to the airlines. In some cases, even groups of pilots resign together without notice, and as a result the airlines are forced to cancel their flights at the last minute.

The DGCA stated that such resignations by the pilots and the resultant cancellation of flights causes inconvenience and harassment to the passengers.

It says, “Sometimes, such an abrupt action on the part of the pilots is in the form of a concerted move, which is tantamount to holding the airline to ransom and leaving the travelling public stranded. This is a highly undesirable practice and goes against the public interest.”

The DGCA also mentioned that such an action on the part of pilots attracts the provisions of sub-rule (2) of rule 39A of the Aircraft Rules, 1937, which implies that the Central Government may debar a person permanently or temporarily from holding any licence or rating mentioned in rule 38, if in its opinion, it is necessary to do so in the public interest.

The DGCA was of the view that it takes about eight to nine months to train a pilot to operate an aircraft used for airline operations—he has to pass technical and performance examinations of the aircraft, undergo simulator and flying training and also undertake a ‘skill test’ to satisfy licence requirements before he is released to fly. Therefore, such a long notice period is justifiable.