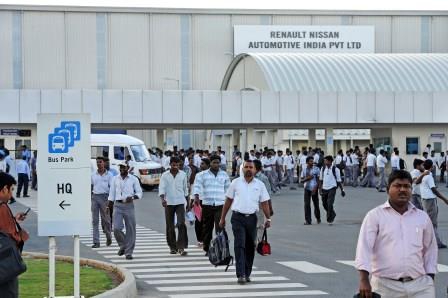 Renault Nissan recently signed an agreement with its workers union at the Chennai plant under which their salaries will be raised by Rs. 18,000 a month, over the period of next three years from the current average salary of Rs 33,000.

Renault Nissan Automotive India has signed a wage settlement pact with workers at the Chennai plant as a part of which their monthly salaries will be raised by Rs. 18,000, spread progressively over the period of next three years.

The 3,750 employees at Renault Nissan are currently earning an average of Rs 33,000 per month and will avail of a few more benefits apart from the salary raise. In addition to the monetary benefits the company has also planned to facilitate creation of an employee township near the factory. A supermarket will also be set up within the factory.

The employee representative union Renault Nissan India Thozhilalar Sangam (RNITS) at the Chennai plant, signed the formal pact which will be effective for three years starting April 1st 2016 until March 31st 2019. The Chennai plant that began operations in 2010, set up a registered employee union in December, last year.

The company which has so far invested Rs 6,100 crore in the facility, believes that employees are its backbone and hence it is crucial to keep them satisfied and motivated. Since the beginning of this plant, this comes as the first wage settlement by the Renault Nissan alliance.

This pact closely resembles the one that Hyundai Motor India signed with the workers at its Chennai plant, in February this year. The United Union of Hyundai Employees (UUHE) was promised an average per month salary hike of up to Rs 19,000 spread over three years.

A little before that, in September 2015, Maruti Suzuki India also signed a wage settlement with its three labour unions, entailing employees an average salary increase of around Rs 16,800 per month spread over three years.

Maruti Suzuki that had seen a lot of labour unrest in the past, secured the trust of its unions through this pact. The wage agreement which was signed with workers at its Manesar and Gurgaon plants was also seen as a new benchmark for the automobile industry in India.

Such agreements with workers not only ensure that they remain satisfied, it also ensures they stay loyal to the firm. Considering the frequent labour disputes the automotive industry faces, such deals act as great pacifiers, keeping the workforce engaged and productive.