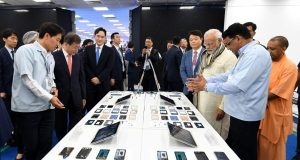 The Make in India initiative, which paved the way for mobile-manufacturing companies to set up factories in the country has led to four lakh jobs in the last four years, said Prime Minister Narendra Modi. He said the number of mobile factories has increased from merely two to 120, as India emerged a potential market for smartphones and digital services. Modi made the statements at the launch of

Samsung’s factory in Noida, which is projected as the largest mobile phone factory in the world.

“Whenever I talk to business community representatives, I always mention one thing, that I don’t think there is a middle-class house in India without at least one Korean product,” said Modi. He revealed that the Samsung plant will produce 1 crore mobile phones every month and create around 1,000 jobs in the market.

With the ‘Government e-Market’, the Government is able to directly buy from producers. The initiative not only helps medium and small entrepreneurs but has also brought transparency.

Modi mentioned that India has emerged as number two in mobile manufacturing in the world. Modi and South Korean President Moon Jae-in took a Metro ride to Sector 81, Noida to inaugurate the new mobile phone factory in a 35-acre facility. The plant is an addition to the current manufacturing facility in Noida. Samsung had set up the first plant in 1997 to manufacture television sets in India.

Apple’s first ever participation in campus recruitment in India

Patanjali on a hiring spree: to hire 8000 professionals