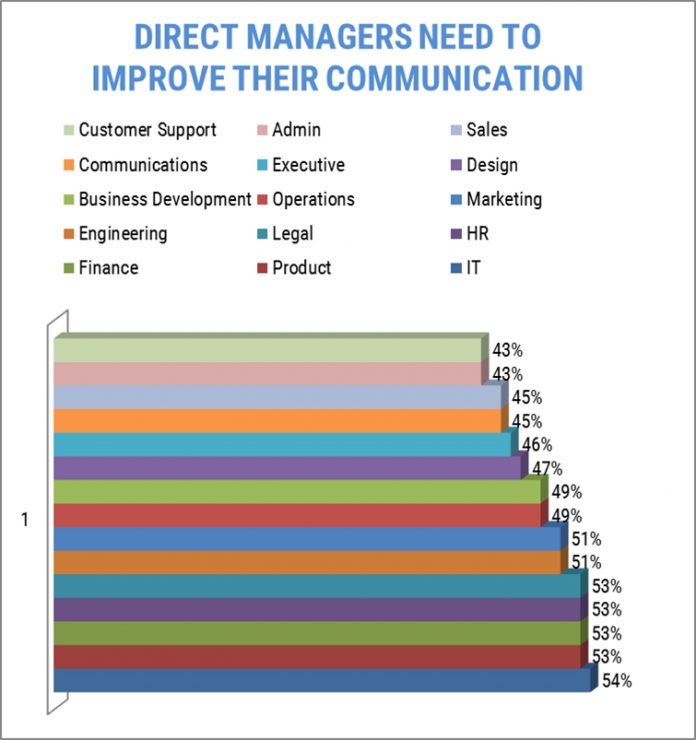 The relationship that managers share with their team is one of the most important pillars that keep the foundation of an organisation’s culture intact. How employees look at their managers can impact performance level and overall work environment in an organisation. A recent study revealed that about one third of people say their bosses have a negative impact on company culture.

A study by Comparably, which surveyed 20,000 employees also found out that the one thing most people (50 per cent) would want their bosses to improve upon, is communication. In addition, people also expect their bosses to work upon improving ‘accountability’ (20 per cent), ‘positivity’ (14 per cent), ‘honesty’ (9 per cent), and ‘work ethic’ (7 per cent).

These are some of the traits that workers expect from their bosses to be able to maintain harmonious and productive relationships at work.  However, on the contrary, not many people agree that they see it as a virtue in their boss. Also, it becomes a tricky situation when not many employees feel comfortable sharing a feedback with their manager.

With feedbacks not being so easy a deal, the respondents opened up in their response when asked ‘if they could do their boss’ or manager’s job better than him/her, if given a chance’. One third of the respondents said that they could do a better job if they were in their manager’s shoes. In that, workers in business development and legal were more likely than any other group to feel this way (53 per cent and 45 per cent, respectively) while, surprisingly, HR workers were least likely, at only 24 per cent.

Going further, if the employees were to be in their manager’s place, the first thing that most people would improve is ‘vision and strategy’ as 33 per cent of the employees agreed upon. This was followed by ‘work culture’ (23 per cent) and increasing ‘employee pay’ (22 per cent). Making a better product’ (16 per cent), and ‘cutting expenses’ (6 per cent) were the lowest priority for employees.

All in all, the survey results hint strongly towards a need for effective communication amongst teams and managers, such that the workers are able to share their views upfront helping the managers work on building robust team dynamics.

Improvement in formal skill training across the country: Economic Survey 2021