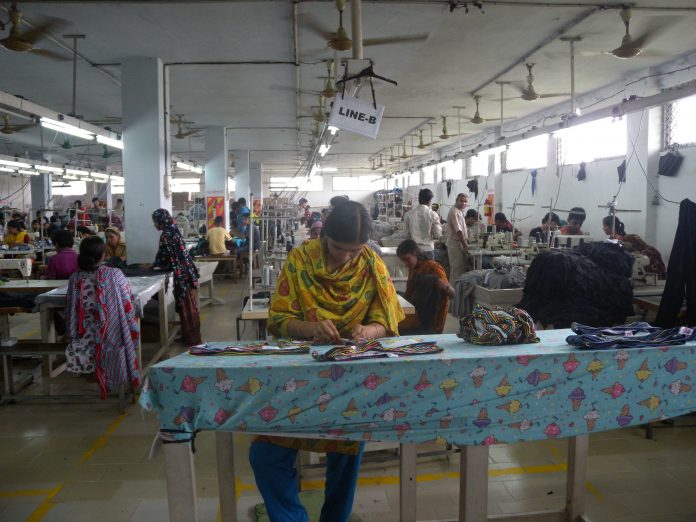 Women in garment factories across India and Asia work under inhuman conditions. Not only are they subjected to physical and sexual violence at workplace, they are not even allowed to take pee-breaks, forced to go on unpaid leave during pregnancy and face physical harm due to long working hours and performing repetitive manual tasks.

Garment factories across the country have been a great source of employment for women from lower middle class families who had little or almost no education.

However, the working conditions in these garment factories are pitiful and the fact is that no one cares. There is a gross violation of employee rights and women employees are subjected to regular physical violence.

In India, women account for about 60-75 per cent of the garment workforce and yet women rarely, hold management and supervisory positions.

A new research report, ‘Gender based Violence in the H&M Garment Supply Chains‘, presented to the International Labour Conference being held in Geneva reveals it all.

Take this case: In September 2017, Radhika, a woman worker employed in an H&M supplier factory in Bangalore, India, was thrown to the floor and pushed & kicked, including on her breasts by her male supervisor and the reason was she couldn’t meet her production target.

It is like a trap. If a supervisor is interested in a woman, he can make her work the half-night shift which gets over at midnight. Then, he may offer to drop her home on his bike. She may not have any other option to reach home at that time of night. In this situation, it is easy for the supervisor to exploit the woman he has targeted.

When Radhika filed a written complaint with the human resource department, this supervisor was let go with a warning and he only had to apologize to Radhika – a light punishment for gross women rights violation which includes outraging the modesty of women. The HR also warned Radhika not to discuss this event further.

Post this incident, Radhika continues to work with the same factory because she needs the job. Her husband passed away and she has a physically challenged daughter to support.

Radhika’s condition is not unique and nor is this H&M supply factory. This story holds true for thousands of other garment factories across the country.

Concentrated in short term, low-skill, and low-wage positions, women workers are at daily risk of gender based violence and harassment at work.

The harassment is not just physical, in general women workers have to face verbal abuse, sexual advances from management and mechanics and retaliation for reporting or refusing sexual advances. The women are forced to work during legally mandated lunch hours, and even prevented from taking bathroom breaks.

In Tiruppur, India, women workers at an H&M supplier factory reported that supervisors may use their control over working hours to make sexual advances after long night shifts. One woman explained:

As we enter the factory, we are asked to form two separate lines: one of young girls and another of elder women. They keep us segregated. Young girls work on a different floor than the older ladies. So, in the end, we have no idea how they behave with these young women workers.

It is like a trap. If a supervisor is interested in a woman, he can make her work the half-night shift which gets over at midnight. Then, he may offer to drop her home on his bike. She may not have any other option to reach home at that time of night. In this situation, it is easy for the supervisor to exploit the woman he has targeted.

Across factories, women workers also complained of physical harm due to long working hours and performing repetitive manual tasks. For example, women engaged as machine operators in an H&M’s supplier factory in Tiruppur reported ulcers and piles from sitting hunched over machines for long hours. Women working as checkers in the same factory reported getting varicose veins as a result of long hours of standing and checking.

An older women worker interviewed during this survey, says, “As we enter the factory, we are asked to form two separate lines: one of young girls and another of elder women. They keep us segregated. Young girls work on a different floor than the older ladies. So, in the end, we have no idea how they behave with these young women workers.”

Why are these women workers so vulnerable?

Most of these women are hired on short term contract which makes it easier for employers to hire and fire workers and therefore save on labour costs during cycles when production wanes. Women workers employed under short-term hiring contracts are at constant risk of being fired. Threats of non-renewal undermine workers’ ability to report workplace violence.

The factories also refrain from hiring local workers and prefer only migrant workers which makes them more vulnerable.

A violent retaliation against women garment workers in Bangalore, India has been reported this year. Their fault was that they formed a union to call for safe drinking water in the factory, reliable transportation, and living wages. This is why the factories in Bengaluru don’t hire local women because they are aware of their rights. Instead migrant women from Andhra Pradesh, Bihar, Jharkhand, Madhya Pradesh, Maharashtra, Tamil Nadu, Uttar Pradesh, West Bengal and other parts of Karnataka are only hired. The migrant status, undermines the ability to seek accountability through formal legal channels.

In a garment factory in Gurugram, Haryana, 80 per cent of the garment workforce is employed as contract workers. Casual and contract workers lack job security, social security benefits, and freedom of association. This facilitates sidestepping of statutory obligations by employers and creates a constant state of insecurity for workers.

In these factories, workers are employed by different contractors responsible for particular production lines. Line contractors may also function as supervisors. Many workers employed on these lines are hired as daily wage workers. High levels of labor mobility between factories within the garment sector in India undermine freedom of association and collective bargaining.

In the Gurugram garment factory, of the 14 production lines, no more than 4 lines are comprised of salaried workers. The remaining 10-11 lines are filled by workers hired through intermediary labour contractors and paid by piece rate. A slightest mistake becomes a reason to be fired from work.

In September 2017, Radhika, a woman worker employed in an H&M supplier factory in Bangalore, India, was thrown to the floor and pushed & kicked, including on her breasts by her male supervisor and the reason was she couldn’t meet her production target.

H&M alone sourced garments from 53 factories this year, but labour experts feel the number may be higher. In fact, as per the premium brand’s most recent supplier list, H&M purchases from 235 garment supplier factories in India. According to shipping data in 2018, over 1.6 million kilograms of goods were exported from Indian supplier factories to H&M until May 2018. Now there will be hundreds of other buyers like H&M from across the world, so one can quantify the number of such suppliers across the country and the number of employees in these factories.

The H&M Sustainability Commitment states that workplace safety and the health and safety of employees must be a priority at all times and mandates the provision of a safe and hygienic working environment, including adequate ventilation.

H&M has also acknowledged this report. In a reply to The Wired, it says, “All forms of abuse or harassment are against everything that H&M group stands for. Violence against women is one of the most prevalent human rights violations. Gender-based violence makes women all around the world suffer daily and undermines their health, dignity and security. This is why we welcome any initiative strengthening the human rights of women at work, such as the international convention against gender-based violence being discussed within the ILO.

This report clearly shows the need of continuously addressing these issues. The empowerment of women economically and socially is a way to prevent gender-based violence. Our position is very clear and we actively support such a development within the global textile industry. We do this by working to enable freedom of association, strengthening workers’ voices and the right to join or form a trade union as well as bargain collectively. These are fundamental rights of workers addressed within our Global Framework Agreement with the global trade union Industrial. We also address this through a number of projects in our productions countries together with the ILO. We will go through every section of the report and follow-up on factory level with our local teams based in each production country.”

However, all of these policies just seems to be on paper. The fact is that H&M is highly dependent on these garment factories and any strict action will stop its supply chain. Till the time customers are happy, who cares about the workers!

93% of employees would trust orders from a robot, finds a...

IT employees in India highly stressed