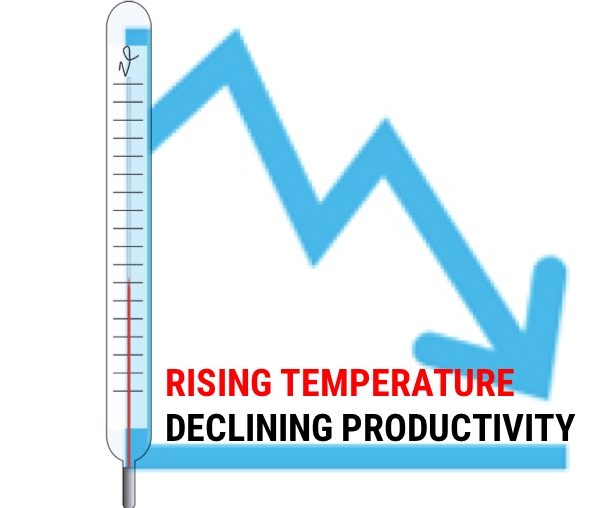 South Asia will be the most affected region, with productivity losses equivalent to 4.8 per cent corresponding to around 40 full-time jobs.

There is a strong link between jobs and the environment. Climate change and other forms of environmental degradation will increase according to the frequency and intensity of extreme weather events and disasters. With each disaster, jobs and productivity will be lost.

According to the International Labour Organisation (ILO), between 2000 and 2015, 23 million working-life years were lost annually as a result of different environmentally-related hazards caused or exacerbated by human activity.

Of all regions, Asia and the Pacific and Africa suffered the greatest loss of working-life years due to human-induced or climate change related disasters between 2008 and 2015, with an annual average loss of, 536 and 376 working-life years respectively, per 100,000 people of working age.

One of the biggest effects of climate change is the rising temperature, which affects productivity.

According to ILO, as a result of human-induced climate change, many of the more than four billion people who live in hot areas will experience negative health and safety effects and reduced work capacity.

Rising temperatures increase the incidence of heat stress and health risks, and the proportion of working hours during which a worker needs to rest and cool down the body to maintain the core body temperature below 38°C and avoid heat stroke.

Heat stroke reduces workers’ performance, partly because slowing down is a natural adaptation to heat exposure. Heat stress continues to reduce productivity and lead to negative occupational health effects and workplace injuries, particularly in the countries most exposed to extreme heat, in sectors that rely on outside and daytime work, and in areas with weaker adaptation, such as factories without effective cooling systems.

Globally, an estimated 1.4 per cent of total hours worked were lost in 1995 due to high heat levels, representing around 35 million full-time jobs worldwide.
The ILO report suggests that with a rise of 1.5°C in temperature across the world, the percentage of total hours of work lost will rise to 2.0 per cent and a productivity loss equivalent to 72 million full-time jobs by 2030. The report states that this conservative estimation assumes a 1.5°C increase in global mean temperature.

South Asia and Western Africa will be the most affected regions, with productivity losses equivalent to 4.8 per cent and 4.6 per cent, corresponding to around 40 and nine million full-time jobs, respectively. However, European subregions will experience a smaller impact.

Even greater temperature rises, as predicted under a business-as-usual scenario, will make some of these areas unproductive and also displace a large number of workers.

Some facts on distractions at workplace