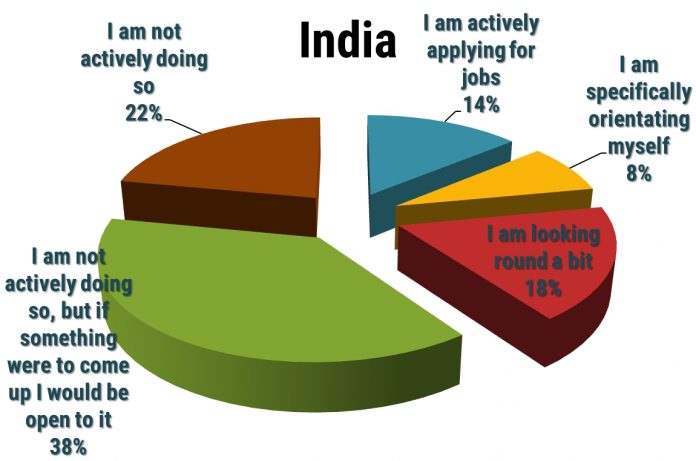 Around 78 per cent of Indian respondents were ready to move on from their existing job, which is highest in the world.

Believe it or not, Indians have the highest appetite for changing jobs. According to a survey by Randstad, 78 per cent of the respondents were keen to change jobs and only 22 per cent said they were not actively searching.

It’s not because they are dissatisfied at the current place of work – 80 per cent of the respondents from India were very satisfied with their current job and another 17 per cent were neutral. Only 3 per cent said they were very dissatisfied.

In that case, what could be the possible reason for frequent job switch or the keenness to do so? It is probably the appetite to grow faster. And in India, one grows faster in terms of salary and ranks when they switch jobs more frequently.

It’s not just the appetite, Indians have actually switched jobs most frequently vis-à-vis any other country in this world. Around 47 per cent of the respondents from India had changed jobs or position in the last six months, when surveyed.

Following India in job change frequency are countries such as Malaysia, Turkey, Hong Kong and Brazil while Luxembourg, Austria, Argentina, and Denmark are at the bottom of the list.

In terms of job change appetite, India is followed by the US, Malaysia, Singapore and Australia.

Argentina is one country were the actual job changes have not taken place, but employees are keen to change jobs given an opportunity – probably, the opportunity to change jobs is less. In Argentina, around 69 per cent of the respondents were keen to job switch but only 16 per cent had managed to do so in the last six month.

The study was conducted online among employees aged 18–65, working a minimum of 24 hours a week in a paid job (not self-employed). Minimum sample size was 400 interviews per country.

How candidate experience can make or break your employer brand