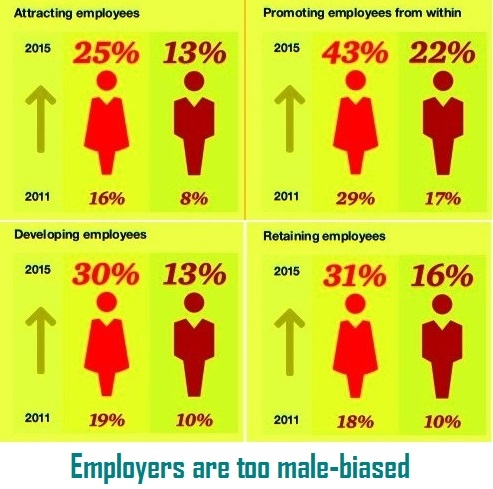 A PwC survey reveals that an inclusive culture is a must to retain women employees.

As per a survey by PwC conducted across 75 countries, around 76 per cent of women millennials in India and Brazil are confident enough to believe that they will be able to rise to the very top levels with their current employers.

Over the next decade, the number of women to enter the global workforce will be around one billion. Between 1980 and 2008, there were only 552 million women who joined the workforce, globally.

In a survey done in 2011, the percentage of CEOs who considered poor retention of female talent as a key business challenge was only 12 per cent, but in 2005, the figure changed to 64 per cent. In fact, around 13 per cent of the CEOs are working on a strategy to retain the women workforce.

Not only are women millennials now joining the global workforce in large numbers but they are more educated than their previous generations, and they also come with a mindset. The study revealed that the primary reason for this segment to quit a job is lack of opportunities for career progression in the current job.

Around 86 per cent of the respondents identified the employer’s policy on diversity, equality and workforce inclusion as an important criterion while deciding to join an organisation. However, their expectations were not always met in practice — 71 per cent respondents felt that while organisations talked about diversity, opportunities were really equal for all. The figure for the same in 2011 was only 54 per cent.

Around 43 per cent of women millennials felt that employers were too biased towards male employees when it came to internal promotions. In 2011, only 29 per cent of the respondents felt so.

Interestingly, millennial women in Europe felt that employers were more male biased vis-à-vis their counterparts in Asia. More respondents from Spain, France and Ireland considered employers biased towards men, while the figure was the least in case of Malaysia and the Philippines.

This implies that a lot needs to be done to retain this employee segment. Despite the fact that women are more likely to outperform their male counterparts at school and at university, and enter the workforce with high confidence and career ambitions, their numbers remain very scarce at the top. In spite of reaching a historic high, currently, only 4.8 per cent of Fortune 500 CEOs are women.

In order to retain women millennials, companies need to commit to an inclusive culture, talent processes, policies and programmes that lean into the confidence and ambition of this segment.

Work–life balance is another criterion for this segment of employees. In fact, both the men and women millennials, voiced a similar opinion and it was consistent across all countries and industries.