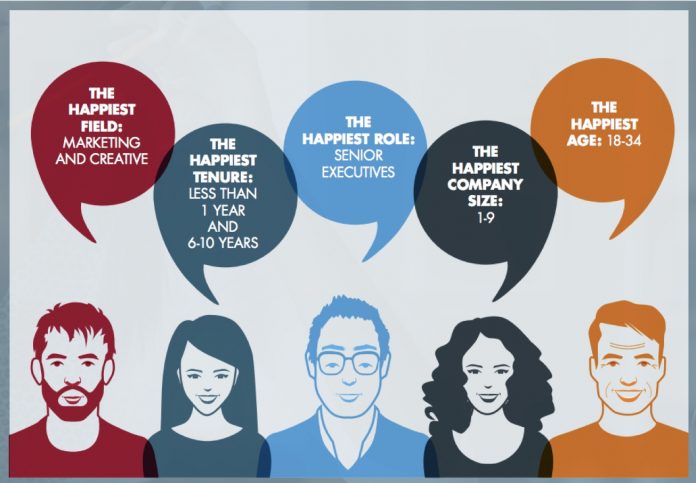 Creative and marketing professionals and those who work in smaller companies are the most happiest lot.

Happiness means different things to different groups of people, but even then there are some people who are happier than others.

This was revealed by a research by Robert Half, which evaluated the happiness levels of more than 24,000 working professionals across eight countries. The respondents spanned all age groups, experience levels and industries.

The study reveals that people are generally happy at work and the average score is 70 on a scale of 0–100.

However, some groups of people scored better than the rest. For instance, people who work in smaller companies have scored above 70 on the happiness scale whereas people in bigger organisations with an employee strength of 10,000 plus have scored only 66, which is below the average score.

People from particular functions appeared to be happier than the rest, such as the marketing and creative gang.

The happiest tenures were less than a year and 6–10 years, which means people are happiest when they are new in the company, probably because they come with a lot of hope. People who have spent more than five years were somehow stable with the company, which made them happier. Again, people who have spent more than 10 years with a given company weren’t among the happiest lot, probably because complacency creeps in after a decade.

The reasons for being happy at work are also different for different people. As the survey indicates, there are three primary reasons for happiness –

1. Pride in the organisation
2. Being treated with fairness and respect
3. Feeling appreciated for the work they do

For an accountant, being treated with fairness and respect is a primary cause of happiness at work. On the other hand, for the finance professionals, feeling appreciated for the work they do is more important.

Similarly, for women, being treated with fairness and respect was far more important to happiness than pride in their organisation or appreciation for the work they do.

However, pride in one’s organisation is the strongest driver of happiness for employees globally. This also tops the list for men and employees of all age groups. In short, feeling good about the company one works for is a big deal to employees. What’s more, workers who feel proud of their organisations are 2.8 times more likely to be happy at work compared to those who don’t.

In terms of level of employees, senior executives are the happiest lot and they also show higher level of interest in work followed by managers and staff-level employees. The least happy were sales and customer-service executives and those who were in admin or clerical jobs.

Happiness of employees has little or no correlation with the stress at work. As the study suggests, technology professionals may not be the happiest lot but they have the least amount of stress, followed by finance and then marketing and creative people.

Happiness is an emotional word we use to summarise the quality of experiences in our everyday work, essentially. It is based on three core positive emotions:

Enthusiasm: This is an intense state that helps people create and seize opportunities. It’s a way to mobilise our efforts, as well as other people’s.

Interest: This can be understood as a focusing energy. It helps us commit to tasks that are perhaps challenging in the short term but have medium-term or long-term benefits.

Contentment : This is a reflective, lower-energy emotion pertaining to the satisfaction of having achieved something. Contentment helps us reflect on what went well and how the same type of success can be replicated.

The study reveals that working professionals aged 18–34 are the happiest and the least stressed in their job. Employees aged 35–54 are the least happy and most stressed. They are also, together with workers aged 18-34, the least interested in their jobs. Things are likely to turn back around for them as employees over the age of 55 score the highest on the interest scale and second-highest on the happiness scale. Those 55 and above, are also less stressed than employees aged 35–54.