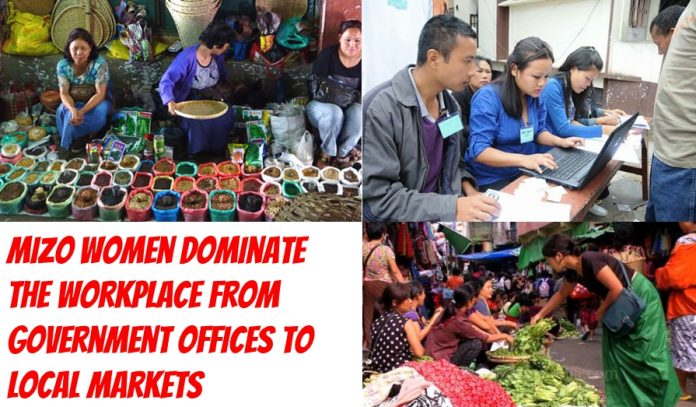 A recent survey conducted by the Mizoram Presbyterian Church’s Synod Social Front has revealed that there are more women than men, even in abattoirs and stone quarries.

Mizoram will put the rest of India to shame when it comes to gender diversity. In this north eastern state, women outnumber men at the workplace in every sphere.

Though Mizoram is still a traditionally strict patriarchal tribal society, the number of women as part of the workforce is certainly an achievement.

A recent survey conducted by the Mizoram Presbyterian Church’s Synod Social Front has revealed that women outnumber their male counterparts even in the male-friendly workplaces, such as butcher houses and stone quarries.

In government offices, women form 54 per cent of the workforce, while in commercial establishments, such as restaurants, shops and vegetable markets, 71 per cent workers are women. Stone quarries employ 62 per cent women workers.

However, in the teaching profession, women constitute only 36 per cent of the workforce—among teachers from middle school to universities. However, Mizo women have held top positions in high school board, university and competitive examinations for the last many years.

The study reveals that women outnumber men till the senior secondary level of education, but for some reason they can’t pursue higher education at the university level. Around 51.5 per cent of students from middle school to higher secondary are girls, but only 47 per cent of university students are women.

In the traditional Mizo society, women were confined to household chores but women organisations in the state have propagated the importance of women going to work and contributing to the economy.

Another area where Mizo women need to showcase their might and strength is politics. Only four women have been elected to the State Assembly since its inception in 1972.