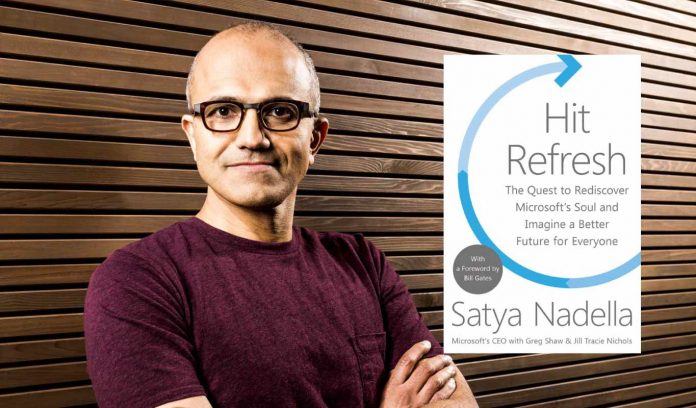 Nadella’s book Hit Refresh, published by Harper Collins, has the blueprint that he is using to change the culture of Microsoft.

Bill Gates was the quintessential nerd who led Microsoft to greatness. Steve Ballmer will be remembered for his chest thumping style. Then came Satya Nadella. He was awkward and geeky and had an introspective style that was endearing.

His first e-mail to his team was to drive innovation. He made it clear that resting on the good old days would not work. “Our industry does not respect tradition—it only respects innovation.” He was an enigma even among employees. He wrote codes and quoted poetry. He truly exemplified the growth mindset, which he claims to be the inspiration that drives him. He has the mind of a novice, who is perennially trying out online courses. He acquired LinkedIn—anyone surprised?

His book Hit Refresh, published by Harper Collins, has the blueprint that he is using to change the culture of Microsoft. He wants to inculcate the spirit of humility when he wants the Company to be a learn-it-all. He is crafting a culture that is all about listening, learning more and talking less. If the market is any indication, Satya is on track. The share price has almost doubled since he took over.

What Satya inherited was not pretty. Windows 8 had a cold reception from consumers. It had missed the bus on mobile. Zune, the Company’s answer to iPod, was described as one of the worst product flops in tech history. Nadella strengthened the cloud business and led two rounds of layoffs as a result of the rejig. Windows, Office and other PC-related products together still generate about two-fifths of the Company’s revenues and three-quarters of its profits. But the Street still keeps its faith.

The book is a terrific study in changing culture. Nadella’s decision to launch Windows 10 in Kenya instead of Sydney was an effort to build a culture of inclusion. Both countries have educated and tech-savvy customers as well as skill gaps. Building a culture that obsesses about the customer is not easy.

Hit Refresh is a good look at Nadella’s view of leadership. Here are the three things leaders have to do:

Another terrific chapter of the book is about ‘Friends or Frenemies’. Ballmer derisively referred to Apple as the ‘fruit company’. Satya knows that he is leaving the audience shell-shocked when he pulls out an iPhone from his pocket. But this one has Microsoft software and applications on it. Being able to collaborate and compete with the giants in the marketplace means walking the tight rope. He has formed partnerships with his fiercest rivals—Apple, Google, Facebook, Amazon—the AGFA companies.

(The author is former chief learning officer, Wipro and an independent HR Consultant now. Follow him on twitter @abhijitbhaduri)

The ‘Panch Sutras’ of talent management