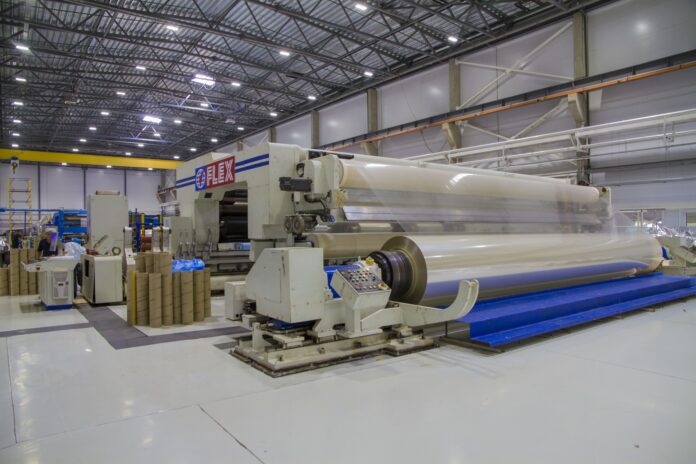 UFlex, a flexible packaging company which also has a global presence in the polymer sciences business, has come up with a campaign called ‘Breaking the Barrier’ calling out to all the women talent and attracting them to UFlex and the packaging industry as a whole.

Talking exclusively to HRKatha, Chandan Chattaraj, president – HR, India and global, UFlex, shares that the Company started the campaign a few months back. The campaign has been so successful in India, that the Company has decided to take it global.

Under the campaign, UFlex is sharing stories of some of the successful women employees at UFlex working in different functions, businesses and roles to share their success stories with the world. The Company will be sharing these stories on social media, predominantly Linkedin, and also in their industry magazine that is circulated internally.

Speaking to HRKatha, Chattaraj says that for UFlex, attracting women talent in various roles has been a challenge. UFlex has a 10,000+ strong global workforce, with 8000 employees working in India. Though the Company refrains from sharing the exact percentage, but Chattaraj reveals that, as of now, the percentage of women at UFlex is in single digit in India, while globally it goes into double digits at certain locations.

“Being in a manufacturing company, we do not have many women coming forward to take up plant operation roles,” shares Chattaraj. “Barriers remain for women in the workforce when it comes to roles traditionally held by men. This is also largely because of lack of women role models in our industry,” adds Chattaraj. 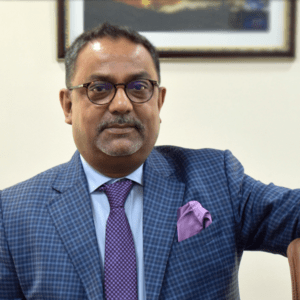 “Being in a manufacturing company, we do not have many women coming forward to take up plant operation roles”

Another challenge that Chattaraj describes is that UFlex is not just into the packaging business, but is also into the holography segment, where it provides marketing holographic products and solutions to its customers.

Chattaraj explains that this is a very new and niche line of business and people are not aware of it. However, for the chemicals business at UFlex, the Company does manage to attract some female talent.

He goes on to admit that attracting female talent in certain roles is also difficult. “We do get female talent in R&D roles for the chemicals business and for sales & marketing roles. We also make efforts to attract more women for such roles,” asserts Chattaraj.

Like other organisations that have strategies in place to attract women talent, Chattaraj says that as a company, UFlex believes that one does not need a particular strategy to attract any kind of talent. “Talent is talent and we believe in giving equal opportunities to everyone whether man or a woman,” states Chattaraj. 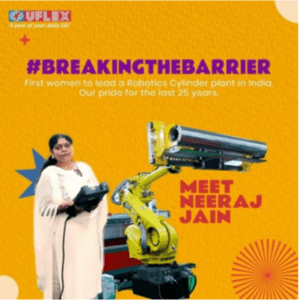 There are many interesting stories from the campaign, one of which is about Neeraj Jain, head of production, cylinder manufacturing robotics plant, who started her career in 1996 and was one of the first ones to start a career in a manufacturing industry in her family.

During her training days, she worked at the male-dominated shop floor where operations were difficult. Still, she came up and became the head of production. Infact, Chattaraj shares that she went to Japan to complete her robotics training. 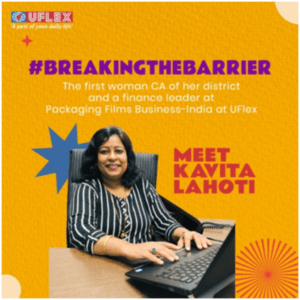 Another interesting story is that of Kavita Lahoti, finance head, packaging films, India. As per UFlex, Lahoti is the first woman chartered accountant from her district, Sriganganagar in Rajasthan. As the finance head of the packaging films business in India, she constantly strives to excel every day and owes a big part of her success to her learnings from the operational excellence programme of the company.

Another story that emphasises the internal growth of women employees at UFlex is about Shalini Bhalla, marketing head, cylinder exports. She started as a front office executive but her impeccable skills and go-getter spirit led to her being moved to the domestic and export marketing division in the cylinders business. There, she has been instrumental in developing new markets including countries such as Thailand, Bangladesh, Nepal, and Sri Lanka. 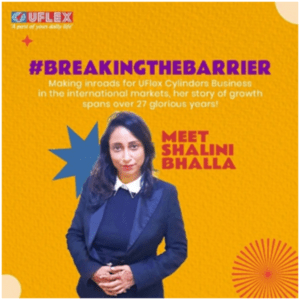 Shalini has covered more than half the world today to successfully position the Company’s cylinder product portfolio as one of the leaders in the space. Bhalla is also one of the oldest female employee at UFlex who has worked with the organisation for 27 years.

Similarly there are various such stories of power women employees that the company has shared and posted on social media.

With the ‘Breaking The Barrier’ campaign, the Company hopes that women will get motivated and inspired to work for UFlex and the packaging industry as a whole. “We have shared some remarkable stories of the women working with us. I am sure these will inspire and attract many women talent,” says Chattaraj.