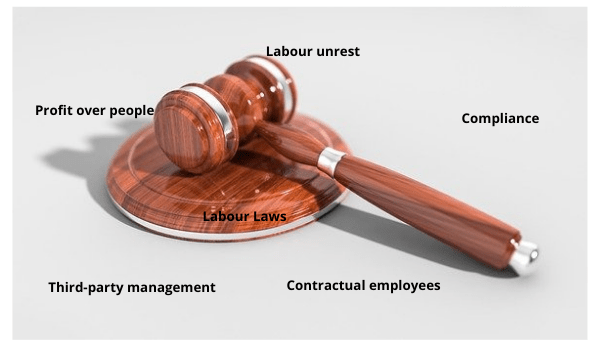 At a time when the country is aggressively courting foreign investment, positioning itself as an attractive manufacturing hub for multi-national companies looking to break up with China, and an economy poised to achieve the much-coveted figure of trillion dollars, headlines of worker violence at an iPhone factory are bound to grab global attention. It is no surprise then that even Karnataka Chief Minister BS Yediyurappa made it a point to note that Prime Minister Narendra Modi was “very worried” about the situation at Apple supplier Wistron’s Narasapura unit near Bengaluru.

This particular instance of workmen turning into protestors may not be as severe as the labour violence of the past, but our hyper-connected times have certainly amplified the episode. “The only communication channel at that time was print media so one had an advantage in the 1970s and 1980s,” recounts P Dwarakanath, non-executive chairman, GSK. “Sometimes, incidents from remote places didn’t even reach the national level unless someone made it a point to,” adds the HR veteran. “Now, it’s not only the print media, but also electronic and social media. So it becomes a topic of global discussion and shows the country in poor light,” notes Dwarakanath. “Such episodes fuel doubts in potential investors and they may hesitate to come here. When they hear about violence, they will start thinking twice,” he cautions.

Both Apple and Wistron promptly released official statements acknowledging non-compliance of labour laws at the newly-opened unit, where over 10,000 workers were churning out the latest iPhones round the clock, to meet their growing demand. Meanwhile, the state government’s inspection report revealed “the HR department has not been adequately set up with personnel of sound knowledge of labour laws,” as per news reports. The state’s inspection also found “a wide gap between practices followed at the factory and legal requirements.” Such lapses in adhering to the land’s labour laws may not always come to light but they are known to exist and are commonly occurring phenomena at the shop floor.

The reasons could be many. From a lack of knowledge and awareness to the infamous ‘chalta hai’ attitude to the not too uncommon ‘profit over people’ approach to business. But labour rights go beyond simple compliance. Violent outbursts by workers are the final manifestation of issues that have been festering and ignored by many levels in the organisation. It’s fundamentally a structural issue, believes Dwarakanath. “Yes, accountability lies with HR but one can’t shy away from the fact and say that HR didn’t know so they didn’t tell me. There has to be a fundamental structure and governance both at the plant level and at the organisation level. If they’re not doing that, I would say it’s a dereliction of duty.”

It so happens that compliance with labour laws isn’t always a top priority in board meeting agendas. “Unfortunately, the board and senior management also lack an understanding of people’s issues,” notes Dwarakanath. “In board meetings, reviewing people experience periodically is never considered an agenda. It’s more a ticking-the-box compliance where everybody says we’ve complied with the labour laws.” The board and senior management only wake up when the workforce has already been driven to react in an untoward manner. “They only react after an incident such as this has happened. It needs to be a proactive approach, not a reactive one,” adds Dwarakanath.

Non-compliance also stems from a factor that often gets overlooked as a technicality. The tendency to differentiate between on-roll and contract workers. “For jobs where contract labour is allowed, those workers are usually provided by a contractor,” explains Sunil Ranjhan, executive VP – HR, Maruti Suzuki. “In most cases, it so happens that the HR team thinks that since it’s a contracted service, they don’t need to monitor how the contractor is implementing and adhering to various laws,” he adds.

“For their own people, who are on the rolls, they will be complying to all sorts of things well within time, but often, when it comes to the contracted employees — since it’s not being monitored closely by the company’s HR — the contractors try to save money by paying wages late or compromising on welfare,” informs Ranjhan.

Can’t shrug it off

Yet, accountability lies with the principal employer. “One may consider them under whatever category and try to pass the buck on to the contractor, but the law is very clear — come what may, all responsibility lies with the principal employer. Just because they’re outsourced employees, for whatever reasons, doesn’t mean one can be absolved of one’s responsibilities,” says Ranjhan.

Therefore, it becomes even more important for “HR departments to monitor their outsourced employees just like they would their regular employees,” recommends Ranjhan. “They should have the same communication channels and grievance-handling mechanisms. My philosophy is very clear – if one treats outsourced employees as one’s own, these kinds of incidents won’t happen.” It’s not all grim since large organisations that breed good HR practices have “thorough and detailed functions for third-party management,” informs Ranjhan.

Back to the roots

A lenient disposition towards labour laws goes beyond corporate biases and back to the campus, points out Dwarakanath. Working at a manufacturing unit is not every fresh HR graduate’s dream job. “They’re probably working at the factory because they didn’t have any other option for a start but their heart is not in it,” he explains.

Studying and understanding labour laws isn’t given priority either. “According to them, labour laws are not strategic like other aspects of HR like leadership development or talent, performance and compensation management. They say if you do only labour laws, you may not have a career. So most aren’t interested in labour laws and relations,” informs Dwarakanath.

The HR veteran says he’s repeatedly highlighted at many forums that “this is the nuts and bolts for any HR professional. Unless one goes to the grassroots – whether it’s in factories, sales or service counters – one will not know how to handle or deal with the ground realities.” Another myth among young HR professionals he would like to dispel is, “they think challenges of employee relations only occur in the manufacturing space. It is not so.” Noting that India is well on its way to becoming a service-oriented industry, Dwarakanath adds, “Be it hospitality, aviation, banks or IT, now one sees employee relations challenges slowly emanating in these areas as well.”