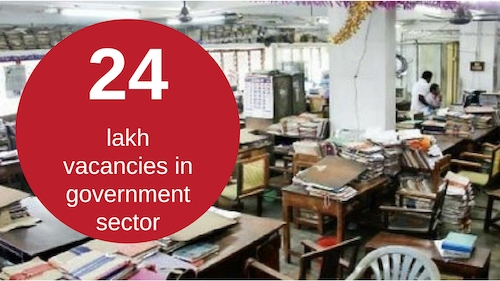 Vacancies for teachers, anganwadi workers, health-centre workers, and non-gazetted railway staff among others yet to be filled.

According to a report by TOI, based on data compiled from answers to various questions posed in the Parliament, there are around 24 lakh job posts lying vacant across departments in the Central and state Governments.

This is a whopping number considering the increasing unemployment. The maximum number of vacancies are for teachers, both at elementary and secondary-school levels. There are around nine lakh posts vacant for elementary school teachers and 1.1 lakh posts for secondary school teachers, taking the total number of vacancies for teachers to over 10 lakh!

These jobs are primarily under the Sarva Shiksha Abhiyan programme, as per which the Central Government provides assistance to the states and union territories to maintain the desired pupil–teacher ratio under the Right to Education norms.

The largest employer of the country, the Indian Railways, also has 2.4 lakh posts lying vacant, and most of these positions are for non-gazetted staff. However, the best part is that Indian Railways has already pushed notification for 89000 posts early this year.

Besides these, there are 2.2 lakh posts vacant for Anganwadi workers, and if these positions are filled, it will help solve the rural employment problem to some extent. There are also 1.5 lakh vacant posts in health centres. About 16,000 are for doctors or specialists, while others include nursing staff. In addition, there are over 21,000 vacant posts at the All India Institutes of Medical Sciences.

Ignoring women’s sexual harassment complaints can discourage others from speaking up:...