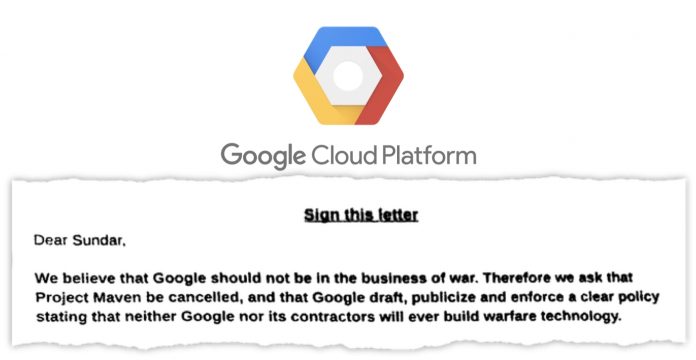 Employees do not want to support or be part of any military work.

Around 4000 employees of Google filed a petition asking the company to cancel a contract with the Pentagon. They demanded Google remove itself from “the business of war.”

The company has also honoured the employees’ request.

Diane Greene, chief of Google cloud, replied to the employees that the company will not renew a contract with Project Maven, a Defense Department program that uses artificial intelligence to analyse drone footage.

She also said Google “will not pursue similar DoD contracts.”

Though it was a small deal, where Google was a subcontractor, yet employees of Google cloud saw it as a leverage for winning more lucrative defense contracts.

Project Maven which was due to expire in March 2019, was worth $9 million and Google cloud executives expected the deal to top $250 million in near future.

It seems even pentagon is not very keen either to run another project with Google due to the employee protest.

Some of Googles’ employees including AI chief Jeff Dean were in support of giving some services to the defense industry, like Gmail, but voiced reservations about using AI for autonomous weapons.

Google employees have said that they were opposed to further contracts with the Pentagon because they see it supporting similar military work. The employees who opposed Project Maven are eagerly awaiting Google’s AI principles later this week.

“We demonstrated that employees have a voice. We need to remember this when we examine the AI principles and their governance mechanisms: we worked to make this happen, and we must ensure that we are not cut out of the process.” the email read.

Andhra Pradesh government staff to go on strike if demands not...