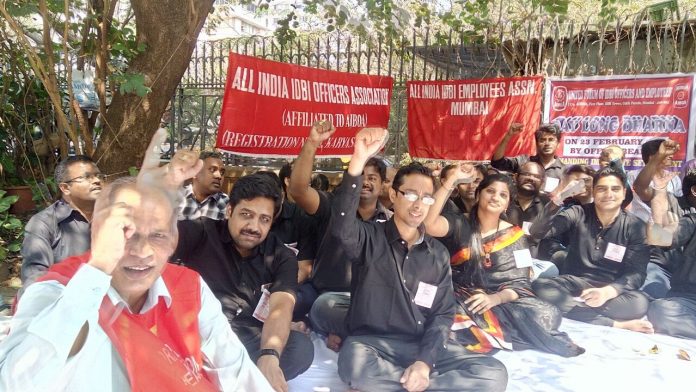 Employees warn of organisational forms of action if the Government fails to review its stand.

Employees of IDBI are up in arms against the proposed 51 per cent takeover of the Bank’s stake by LIC. They insist that the move will privatise the Bank bypassing the assurance given to the Parliament.

“The subjective move of the Government will tantamount to reneging on the solemn assurance given by the then Finance Minister of the NDA Government on the floor of the Parliament on 8 December, 2003 that post conversion, the Government shall at all times, maintain not less than 51 per cent of the issued capital of the Company,” All India IDBI Officers’ Association General Secretary Vithal Koteswara Rao, mentioned this in a representation to Union Minister Arun Jaitley.

Rao added, “This solemn assurance given on the floor of the Parliament forms part of the records of the Parliamentary Committee on Assurances formed, the very basis for the ultimate passage of the IDBI (Transfer of Undertaking and Repeal) Bill, 2002.”

Considering the fact that the Bank has shown healthy operating profits, burgeoning provisioning to NPAs and write offs are affecting the bottom line of the Bank, he said. “While we demand of the Government of India to put in place stringent measures to recover the non-performing assets and fix accountability on all the concerned for the burgeoning non-performing assets and mammoth write offs, we fervently urge upon the Government of India to rescind its contemplated move to divest its equity in IDBI Bank below 51 per cent in contravention of the solemn assurance given by the NDA Government to the Parliament,” Rao added.

As the contemplated decision which is only a facade for virtual privatisation of IDBI Bank will adversely impact the interests of the officers and workmen staff, the United Forum of IDBI officers and employees through this letter registers unequivocal opposition and protest over the reported decision of the government to dilute its stake in the bank in favour of LIC, leading to privatisation of the Bank, he noted.

Rao warned that if the Government fails to review its stand in the matter, the officers and employees of IDBI Bank will be left with no other option but to take recourse to organisational forms of action, which on their part, they are anxious to avoid at this juncture.

Siemens partners with Infosys for an effective learning platform