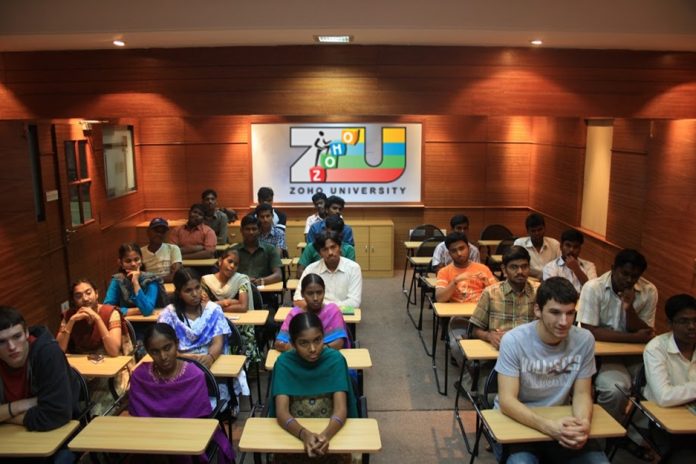 The Company brings in talent early on and develops it to fulfil its requirements within a year, following it up with a six-month internship.

In a labour-intensive country such as India, there is a huge demand– supply gap in talent. In times when technology is advancing at a rapid pace, our education system also needs frequent updation, in the absence of which most learning for any professional happens on the job. The IT industry especially, despite numerous engineering institutes churning out millions of students each year, still struggles to fulfil its talent needs.

Zoho Corporation, a Chennai-based IT product company identified this as a significant concern in its early days itself and set out on a journey to fulfil its talent needs in the most unconventional way. To start with, it conducted a simple survey amongst its employees, over a decade back and asked them how useful their college education had been. Not surprisingly, only 20 per cent felt that it had been really useful while the others responded in ways that conveyed that it had either been irrelevant or a waste of time and money.

As a startup after the organisation was founded in 1996, Zoho struggled to hire the best of the high-cost, high-quality talent from the premier institutes in its initial few years. This struggle, coupled with the results of the survey, triggered the conception of what’s now known as ‘Zoho University’. This is where Zoho develops hand-picked high-school graduates into well-equipped software engineers and hires them on salaries at par with engineering graduates.

“We capture engineering-level talent four years earlier and provide them context-relevant education, instead of waiting for engineering pass-outs and then having to work on them further. We develop ZU graduates much earlier to be at par or even above those who would have completed a conventional engineering course.”

It is in line with the Company’s founder Sridhar Vembu’s vision— to have businesses where the hidden talent is, instead of draining away talent to other locations where the companies operate. Speaking at an event, Vembu once quoted that, “Universities are becoming talent vacuum cleaners as the graduates mostly tend to go out to the metro cities where the jobs are.”

With that idea, Zoho University goes to the schools nearby in the state and gets the students to take a basic reasoning test, based on which it selects students for the University. It is similar to an incubation centre, where Zoho brings in talent early on and develops them to its requirements within a year, followed by a six-month internship at the Company. Rajendran Dandapani, ?director of engineering at Zoho Corporation, who has been at the forefront of the initiative says that, “We capture engineering-level talent four years earlier and provide them context-relevant education, instead of waiting for engineering pass-outs and then having to work on them further. We develop ZU graduates much earlier to be at par or even above those who would have completed a conventional engineering course.”

The students at the University are taught basic or communicative English, mathematics and computer programming and are offered a stipend while they study and learn. Their stipend grows as they progress in the course. It further goes up as they reach the internship stage and then get placed across teams. The managers handling various projects are constantly in touch with the Zoho University students and keep track of their development to ultimately hire them in their teams after an interview process.

The stipend, competitive salaries and the entire effort are looked at as an investment into ensuring a stronger future for Zoho, rather than a cost. “Zoho University is not just about giving back to the society, but also makes immense business sense,” says Dandapani.

The students at the University are taught basic or communicative English, mathematics and computer programming and are offered a stipend while they study and learn. Their stipend grows as they progress in the course. It further goes up as they reach the internship stage and then get placed across teams.

Sharing the business benefits of the initiative, Dandapani explains that most employees in the corporates function on the monthly loyalty concept, working towards the salary at the end of each month, but at Zoho, employee loyalty is felt differently. “Since the Zoho University works on the vidyalaya concept, the relationship that our employees from the university experience is that of guru-shishya,” he says.

Consequently, the attrition rate among the Zoho University talent at the company is much lesser as compared to the talent that comes in from various other sources. In turn, it reflects in seamless service and product quality as people who stick for long are stable and productive. The integrity and stability ensure great business outcome as there is no frequent change of guard.

This model of harvesting organic talent for business needs has gained so much traction that a lot of other organisations are approaching Zoho for advice on such an initiative. In addition,  many students who even have the ability and financial capacity to join formal engineering institutes are showing keen interest in joining  Zoho University. The reason is clear —nobody wants to waste time and money studying outdated concepts that make little sense in the world of work, when there is some place that offers contemporary education with the required exposure to real work.

A lot of people are now voluntarily choosing Zoho University, considering which, the Company has also launched a 2.0 version of  the university, called Zoho University Fast Track. Under this programme, it has currently got six students who are good at English, Mathematics and Computer programming. These students follow a highly advanced, booster curriculum as part of the course.

Dandapani shares that his son is also among the six students in the first batch. Realising the futility of credentialism in the Indian education system and the need for contemporary knowledge empowerment amongst the youth, Dandapani concludes, “We’re sowing the seeds for future Zoho here at the Zoho University.