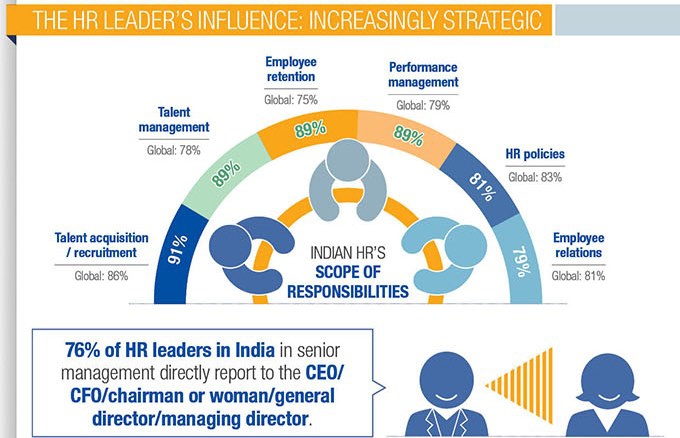 It’s not just about designation and importance within organisations. Indian HR leaders have also showcased their advanced outlook towards critical issues.

More than three-fourths of the HR leaders in India Inc. enjoy the CXO status and report directly to the top boss, be it the CEO, CFO or the chairman of the company. This implies that, HR heads in Indian companies play a more significant and important role in the company’s management strategy than their global counterparts. The average for the same, worldwide, is only 63 per cent.

Not only do Indian HR leaders hold heavy designations and high importance within organisations, they have also showcased their advanced outlook towards critical issues. For instance, around 12 per cent of Indian organisations named diversity and inclusion as a top priority for HR, whereas the global figure was only 4 per cent. In fact, in the new Indian HR ecosystem, diversity is no longer a mere buzzword. Rather, it is now a prerequisite to overall business success.

In fact, among the companies, which consider diversity and inclusion to be the top HR priority, 72 per cent have a specified HR budget on related activities. Besides, 12 per cent of these companies have people with sole responsibility to manage this function, while 50 per cent have people with shared responsibility. However, there are also 38 per cent of companies that have no function or team responsible for diversity and inclusion at all.

These findings are part of the survey done by recruitment firm, Michael Page, that tracks the changing and challenging role of HR globally. The report is based on data collected from over 2,500 HR managers working for SMEs and blue-chip companies in a cross-section of industries, across 65 countries.

When it comes to prioritising issues pertaining to human resources, India and Germany show similar traits. Talent acquisition is a top priority for both Indian and German organisations. In the former, around 45 per cent of the organisations rated talent acquisition and recruitment as a priority, and in the latter, 42 per cent. The global average for the same was only 32 per cent.

The only point where Germany and India differ is talent management. While German organisations do not acknowledge talent management as a major HR priority, more than half of the companies across India and South East Asia consider this to be on their top three HR priorities for the next 12 months. The global average, though, was only 33 per cent.

The Michael Page report states that this is primarily due to rapid economic growth and a less-established HR function that must evolve quickly for this upsurge to be sustainable.

For around two-thirds of organisations, worldwide, employee performance and staff turnover were the dominant HR KPIs, while for India the figure was 86 per cent. In comparison, employee performance tracking was part of the KPI for only 17 per cent of companies in Italy, but for the UK & Ireland it was 92 per cent.

It is evident from this study that, India seems to be gearing up for a war of talent. Around 66 per cent of Indian HR leaders expect their workforce to increase over the next 12 months and around 45 per cent of organisations in India have increased their recruitment budget. The global figures are 48 per cent and 27 per cent, respectively.

65% employees optimistic about new technology, 32% companies ready for it