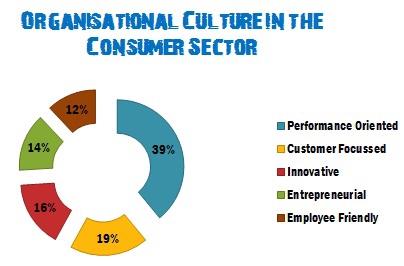 Around 39 per cent and 26 per cent of respondents participating in a survey, from consumer and services sectors, respectively, opined that their respective companies was best defined as ‘performance oriented’.

When asked to define their company on the basis of culture, around 39 per cent of the respondents from the consumer sector opined that their company was performance oriented.

When the same question was thrown to employees from the services sector around 26 per cent voiced a similar opinion.

According to the survey conducted by Executive Access Research Group on ‘Culture and its impact at work place’, only 19 per cent of the respondents from the consumer sector said that their company was ‘customer focussed’.

Similarly in the services sector, the maximum vote was for ‘customer focussed’ (29 per cent) marginally higher than ‘performance oriented’ which got 26 per cent of votes.

Interestingly, around 24 per cent of respondents from the services sector also defined their company’s culture as ‘entrepreneurial’, which was 10 percentage points more than the responses for the same question in consumer sector.

The remaining 14 per cent and 7 per cent of respondents from this sector claimed their company was ‘employee friendly’ and ‘innovative’, respectively.

If employees don’t buy in the culture of the company, attritions are bound to increase.

As per the survey, 42 per cent of respondents from both services and industrial sector believed that the best way to arrest high attrition was by bringing in empowerment and independence for employees.

Creating clarity in the roles and career paths of employees came in a close second – 36 per cent in industrial sector and 32 per cent in services voted for the same – while ‘competitive pay’ with only 10 per cent votes was the least influential factor. Interestingly it was even lower than ‘ownership in business.’ This implies that employees want to play a more active role in the growth of the company rather than being dependent on the mere pay package.

In the services industry, all initiatives or benchmarks for employees, attribute to the value addition that an employee brings to the quintessential- customer. Efforts are being made by companies to encourage employees who make their customers’ experiences more valuable and gratifying. An entrepreneurial spirit directed towards bringing forth rich customer experiences is the ideal culture of most companies in this sector.