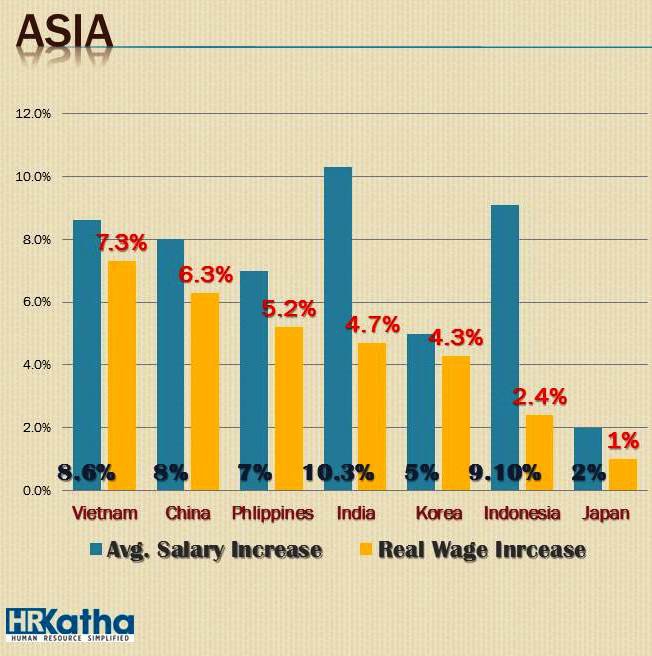 Even if India’s inflation rate of 6.4 per cent is factored in, the real wage increase will be 4.7 per cent, implying double the growth rate of 2015.

The Indian workforce is expected to get an average salary hike of 10.3 per cent, which places it among the top five counties in the world. The other countries are Venezuela, Argentina, Ukraine and Egypt.

However, if the rate of inflation is taken into consideration, the effective rate of salary increase for India will be 4.7per cent.

Among the BRICS countries, in Brazil, the effective real wage changes will be in negative with a pay cut of 1.2 per cent though salaries are expected to go up by 7.7 per cent. A similar situation can be seen in Russia, where despite an average salary increase of 7 per cent, with inflation at 14.5 per cent, real wages are set to fall by 7.5 per cent. The degrowth in Russia is due to the impact of economic sanctions and falling oil prices,  which hit the economy.

The high inflation rate will result in an effective salary cut for employees in Ukraine and Egypt as well.

In Asia, India is positioned at the top, ahead of Indonesia, Vietnam and China, in terms of average salary increase. However, Vietnam tops the list of real salary growth, with 7.3 per cent increase followed by China and Thailand at 6.3 per cent and 6.1 per cent, respectively. The highest salary growth predicted in Asia is not surprising, given the war for talent in the region.

“Companies are more focussed than ever before on flexibility. They are willing to customise their strategies, even in link with rewards. The effort to retain talent can be directly linked to this,” says Amer Haleem, business manager, productised services, Hay Group India.

However, India’s salary growth rate is still double of what was observed in the last two years. In 2015, the real salary increase for India was 2.1 per cent and in 2014, it was only 0.2 per cent.

The Korn Ferry Hay Group released this forecast after evaluating the pay database of 20 million people in around 25,000 organisations, across 75 countries. However, the predictions for average real wages increase are based on 73 countries in Hay Group’s database, excluding Ukraine and Venezuela, where political turmoil and high inflation have led to real wage decreases of 36.8 per cent and 52.6 per cent.

With a 4.2 per cent average increase in real wages, the rate of growth is highest in the Asian countries, vis-à-vis, rest of the world.

However, the average real salary increase globally will be around 2.5 per cent – the highest in three years and as pay increases combine with historically low inflation, it is expected to leave employees across the globe better off.

Despite China’s economic slowdown, coupled with plummeting stock markets and reduced exports, workers in the country are set to see an eight per cent salary increase in 2016, as employment rates continue to grow due to the increasing demand for skilled workers and the sustained rise of the burgeoning middle class.

The only country, which expected to see a negative growth in terms of real salary is Egypt , where employees could see a cut in real wages by 0.4 per cent.

Lebanon and Jordan are expected to experience a real salary growth of 11.5 per cent and 5.3 per cent, respectively. UAE is set to see the slowest real wage growth of 0.9 per cent — which is far lower than the figure of 2.8 per cent in 2015. Syria, Iraq and Iran have not been part of this survey.

This year’s global salary forecast shows that for the majority of countries, real wage increases in 2016 are set to be the highest in three years. Differing macro-economic conditions means there are stark variations globally, but overall, decent pay increases, coupled with extremely low (and in some cases, zero) inflation indicate a positive outlook for workers.

In emerging economies, upskilling workers is crucial for companies to maintain competitive advantage. Skilled employees can expect to see wages rise as talent shortages will drive salaries up.