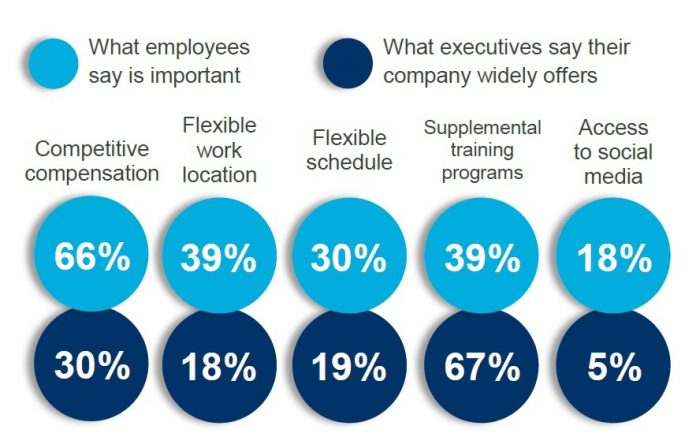 Despite the fact that Indian CXOs fail to gauge their employees’ needs, the Indian workforce is among the happiest lot in the world. SucessFactors, a SAP company, identifies these gaps.

What will be the workforce like in the year 2020? It will be as diverse as one has ever seen. First, there will multiple generations at work together, which means that there will be people with different skills, experiences, habits and motivation levels. There will be more freelancers and contractual employees who may even outnumber the full-timers.

According to Workforce2020, a global survey done by SucessFactors, a SAP company, and Oxford Economics, around 80 per cent of the Indian companies revealed that they were increasingly using contingent, intermittent, seasonal, or consultant employees, and the global figure for the same was 83 per cent.

Around 24 per cent of the Indian companies voted for a change in HR policy due to the changing dynamics at the workplace. The change would be in terms of compensation, training and HR technology.

So are the Indian companies geared up to adapt to these changing workplace?

Around 23 per cent of Indian companies use quantifiable metrics and benchmarking for workforce development; 37% know how to extract meaningful insights from that data.

However, when it comes to understanding the millennial generation at workplace, there is a lot to catch up for the Indian companies. When Indian executives were asked to give their opinion on the millennials, around 42 per cent believed that millennials will consider leaving their job due to lack of learning and development. However, when millennials were asked about the same, only 2 percent of the respondents said that they have done so.

Indian companies lay too much focus on supplemental training programmes, but fewer employees are in favour of this. This implies that the entire effort would go futile. In fact, only 32 per cent of employees said that their company provides the right tools to help them grow and improve job performance.

On this front Malaysia tops the list highest satisfaction level among employees with 59 per cent of the respondents claiming that are satisfied or very satisfied with their jobs. Australia was at par with India, while the other two countries where above 50 per cent respondents have claimed satisfaction are South Africa and Switzerland.

Interestingly, all countries in the Americas (both North & South) except the US have recorded low satisfaction level among employees. Chileans were most unsatisfied with only 22 per cent employees claiming that there were happy with their jobs. Brazilians come next with 23 per cent, followed by Columbia (24 per cent), Mexico (25 per cent) and Canada (27 per cent). In the US, only 33 per cent employees claimed they were happy.

When it came to leadership issues, both the senior executives and the workforce of Indian companies seem to be on the same tangent. Both agree that leadership was lacking—and companies were not focused enough on developing future leaders.

The survey included executives and employees from across sectors be it banking, insurance, public sector, healthcare, public services and consumer goods. While one hands the CXOs and functional heads of companies including the vice-presidents were interviewed, the front line employees, and business managers and line managers were also part of the respondent team.