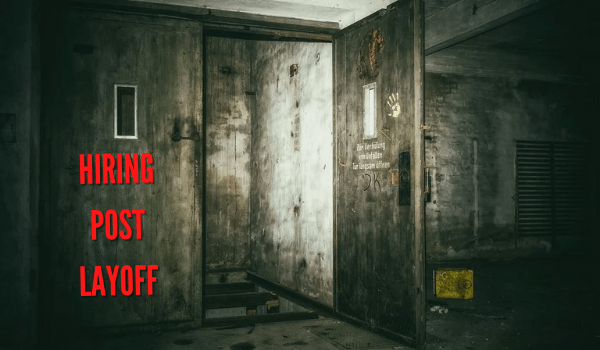 In early 2008, senior managers at the Finnish telecom company, Nokia, were celebrating a 67 per cent increase in profits. Three years later, the Company’s mobile business tanked, and it had to lay off 18,000 employees across 13 countries.

What we are trying to establish is that it’s an uncertain world out there, and layoffs are inevitable. The reasons could be many – sometimes external business scenarios, at other times, the company’s individual business performance, or even a company’s attempt to relocate or re-strategise.

Layoffs are a reality, and so is the hiring process, which follows every layoff, unless the company has completely shut down its operations.

Restarting the hiring process after a mass layoff can be tricky and critical. Companies need to move very cautiously, else it can turn out to be a bumpy ride.

Every mass layoff has a ripple effect, and on multiple stakeholders – the laid off employees, the existing employees, and the potential employees. Not only does it adversely affect the job market, but the bad press resulting from a bad layoff also affects the consumer market, and has a negative effect on the overall brand reputation.

Ashish Anand, CHRO, SAR Group, believes in nipping it in the bid. According to him, companies can do little after the damage has happened. Therefore, organisations need to be extra cautious and show genuine empathy, during a layoff exercise.

The layoff should appear fair and just. In fact, in many countries in the Europe, companies do require to provide a social and economic justification, while announcing or before executing a layoff.

Irrespective of the reasons for the layoff, what companies need to do is ensure a soft landing for those who have been laid off.

Anand says, “Many companies do go out of their way to outplace the exiting employees in other companies that offer similar roles.” This is what OYO Rooms tried to do following a massive layoff.

“Similarly, if the driving factor of the layoff is relocation of the office, then existing potential employees should be offered an opportunity to relocate to the new city instead of just laying them off,” says Ganesh Subramanian, chief human resources officer, More Retail.

These are small gestures, which can nullify the negativity to a certain extent.

Clear communication is key here. While approaching the employers, many job seekers feel that hiring is just a process of replacing the existing employees with a higher pay scale, in order to avoid the increment. Here, transparent communication will be effective. In fact, companies should try and rewrite the job role and revise the pay scale with a proper justification. This will clear the air.

Subramanian says, “Transparent and clear communication has to be set up between the employer and the employees. In fact, this measure may be efficient even if the company is hiring new talent instead of rehiring the laid off ones.”

It’s a daunting task, but companies need to earn back their goodwill, and what better way than to rehire those who have been victims of downsizing. Many are of the opinion that the first right of refusal should go to the past employees. Shantanu Banerjee, CHRO, Bajaj Allianz Life, says, “A company should prefer rehiring its laid off employees after a mass layoff, provided they were not sacked for underperformance, and there is a skill match. “

Apart from the goodwill earned, the company also benefits because there is already a cultural connect with former employees, and the organisation is acquainted with their personalities, capabilities and work ethics. However, there is one line of caution for the employees —they should not hold any grudges or resentment, for being laid off in the past. Negativity can be contagious.

For this reason, it is also advisable that companies should do a proper mapping before restarting the hiring process, and also get the numbers right in terms of team strength. This will help avoid another layoff in the near future.

With inputs from Sudeshna Mitra

Organisational think tank now sits at the bottom of the pyramid