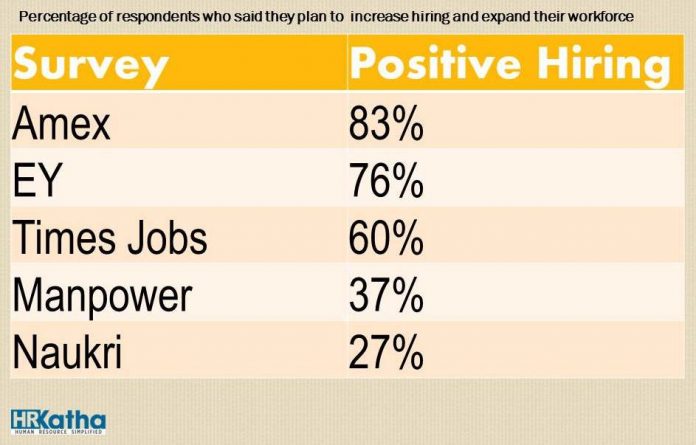 Various global and local surveys recently revealed a growing focus around workforce expansion plans but whether organisations are actually ready to absorb all that talent, is yet to be seen!

If we go by the several surveys, India Inc. seems to be riding high on its hiring plans. Be it because of the forward looking economic plans of the government or the existing need for businesses to grow rapidly, various studies reveal that India is specifically looking at hiring more in the coming times.

As per the Global Business and Spending Monitor survey conducted by American Express in partnership with CFO Research, 83 per cent of Indian executives expect their companies to hire more and 52 per cent respondents expect employment to grow by over 10 per cent.

Similarly, the Manpower Employment Outlook Survey reveals that India is most optimistic on the hiring outlook, with 37 percent of employers forecasting an increase in staffing levels.

The Naukri Job Speak Index also recently revealed a 27 percent surge in hiring activity this May as compared to May 2015.

The TimesJobs.com Job Outlook 2016 survey of over 1,600 employers across India reports positive hiring plans by nearly 60 per cent of the surveyed organisations.

The EY Global Job Creation Survey that covered nearly 2,700 entrepreneurs in 12 major economies which includes 200 respondents from India and China states that 73 per cent of Indian respondents expect to increase their overall workforce.The last few years have seen a trend of highly optimistic predictions which prove to be lopsided when it comes to reality.

Now, the big question that arises is ‘if the hiring plans are actually implemented as expressed’. As was seen in the recent cases of Flipkart and L&T Infotech delaying or withdrawing offers, which created a sense of doubt regarding the hiring scenario, especially in campuses, and ignited a debate amongst the industry and academia.

Having said that, these reports have although kicked in a positive hiring outlook not just in India but across the globe, the proof of the pudding will come out only in the implementation of these hiring plans.

Mangesh Bhide, Technology HR Head, Reliance Jio Infocomm, says, “The last few years have seen a trend of highly optimistic predictions which prove to be lopsided when it comes to reality. There’s mostly a slowdown in hiring by the time organisations approach the third or fourth quarter, owing to the shrinking budgets, and this holds true across sectors. While the manufacturing sector generally sees a 10-15 percent deviation from the predictions, the deviation in other sectors is highly skewed, which is why I am really sceptical of the current hiring projections coming true”.

“Although there is no dearth of opportunities but entrepreneurism is gaining larger attraction while jobs will see only an average growth in the coming times”, he adds.

These reports seem to be projecting either over-enthusiasm or may be representing a limited view.

On the same front, CEO, CIEL HR Services, a leading recruitment agency, opines, “These reports seem to be projecting either over-enthusiasm or may be representing a limited view. Companies in sectors such as energy, infrastructure, mining, manufacturing etc. are optimistic about a few positive signs in the horizon such as good monsoon, passage of GST bill, investment in the core sector by government aided by divestment of some of the PSUs, PPP models of development, clean energy push, smart city projects and so on. However, firm orders to recruit and expand are not rushing in. Employment growth in these core sectors is at best 5 per cent”.

Mishra also shared that the IT and outsourcing industry has been a source of job creation. “As technologies change and their clients look to derive more value out of the outsourcing providers in India, there is hiring for new skills and new roles at the usual pace. Job growth has remained at 7-8 per cent for the last couple of years”, he said.

Despite the economic reforms targeted at boosting businesses, and organisations looking to expand, a bigger question is – whether organisations have the stage set appropriately to welcome new talent on-board?

Whether the hiring promises will see the face of reality, will depend on the ability of organisations to work in line with the current trends but plan for a future that is volatile, is in a disruptive phase and requires immense agility and adaptiveness in functioning.

How to identify and deal with dissenters

A ‘two pizza team’: How does it benefit businesses?