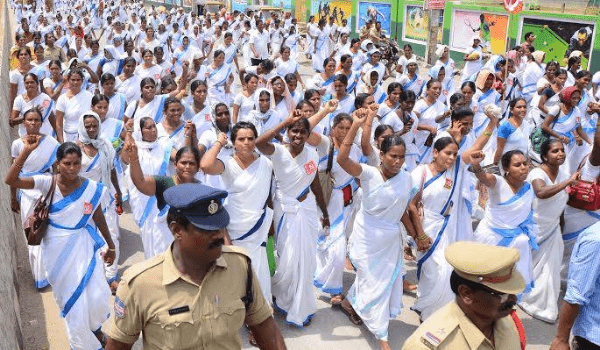 Just when an ASHA worker in Rajasthan made headlines for rowing a boat in difficult conditions to reach villagers awaiting vaccination, in Telangana, ASHA workers are raising their voices against low pay. The accredited social health activist workers are seeking an increment from the state government. They are demanding fixed salaries and want to be paid Rs 10,000 a month instead of Rs 7,000 considering that they are overburdened with work.

The workers’ unions have approached senior health officials to plead their case. The workers want to earn fixed salaries instead of the honorarium that they are paid. They also want this honorarium to be hiked as per the Pay Commission.

The workers point out that their demand for increments have not been met by the state government, so it is only fair that they at least be granted a fixed salary of Rs 10,000, as their counterparts in Andhra Pradesh are receiving. The case of these ASHA workers is being supported by the Telangana Voluntary and Community Healthworkers Union (TVCHU) and the state association of ASHA workers led by the Centre of Indian Trade Unions (CITU).

The workers are also demanding that pay revision be implemented, as per which they are entitled to a 30 per cent hike. Contract workers and outsourced staff were promised a 30 per cent increment under the 11th Pay Revision Commission in March, which has not been implemented yet.