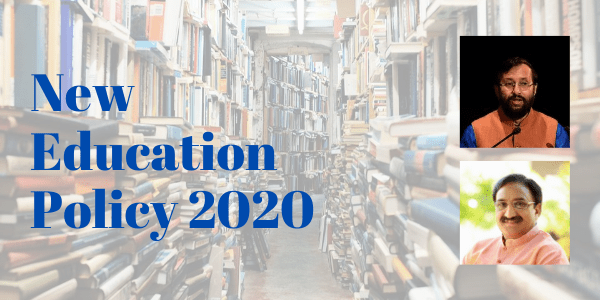 The Union Cabinet, on July 29, has approved the National Education Policy 2020, with an aim to reform the school and higher-education sector in the country. The final nod was given at a press conference in New Delhi, after immense discussions and consultations between the cabinet and the HRD Ministry.

Two committees were formed and their reports were considered while framing the new policy. Since it comes after 34 years, this new education policy is a truly historical one for the country.

With the renaming of the HRD Ministry as the Education Ministry, a lot of other changes have been introduced in the Indian Education Policy after more than three decades.

To begin with, the New Policy aims for ‘Universalisation of Education’ from preschool to secondary level with 100 per cent gross enrolment ratio or GER in school education by 2030.

One of the key announcements was the break-down of the existing 10+2 structure and introduction of the 5+3+3+4 structure of School Education. This means, the actual number of years will remain the same and that play school, nursery or kindergarten classes will be combined with classes 1 and 2.

Here is how the basic education is segregated:

This stage has been suggested for ages three to eight. The multi-level play activity-based learning will include three years at play schools, and the kindergarten classes will cater to ages three to six. To this, the grades I and II or classes I and II for students of ages six to eight will also be added, keeping the focus on development of language skills and teaching by play-based and activity-based curriculum.

This is for ages eight to 11 or classes III to V. The focus will shift to play, discovery and activity-based and interaction classroom learning. The focus till this stage will remain on development of language and numeracy skills, in accordance with the cognitive development of a child.

This structure refers to classes VI to VIII, transforming the pedagogy from the existing system to a more experiential learning in the sciences, mathematics, arts, social sciences and humanities.

This includes classes from IX to XII or secondary education. The changes suggested at this stage include a multidisciplinary study, where students will be able to pick and choose any set of subjects from the available structure. The focus will be on greater critical thinking and flexibility, allowing the children to pick subjects as per their interests – even technical and arts.

In addition, more emphasis will be laid on foundational literacy and numeracy, and there won’t be much difference between academic, extracurricular and vocational streams in schools. The policy says that vocational education will start from Class VI, with internships.

The National Testing Agency will conduct a single-entrance examination for admission into higher-educational institutes in the country after grade XII. The highlight of the Undergraduate stream reforms under NEP 2020 is that multiple entry and exit options will be allowed. One can complete UG in either three or four years, depending upon the career path that the person has chosen. The options include certificate after one year, advanced diploma after two years, bachelor’s degree after three years and bachelor’s with research after four years.

Higher education – postgraduation and beyond

Unlike UG, the post-graduation stream will be of either one or two years’ duration. In this policy, Master of Philosophy (M.Phil) will be discontinued. Also, each district will have  Multidisciplinary Education and Research Universities (MERUs) which will be at par with the IITs and the IIMs .

There will be one single regulator for all higher-education streams except legal and medicine. The existing regulators, such as the University Grants Commission (UGC) and the All India Council for Technical Education (AICTE) will be merged and a new bill will be introduced in the Parliament to facilitate this.

The New Education Policy 2020 will undergo a change from summative assessment to regular and formative assessment, which will primarily test core capacities and competencies rather than months of coaching or memorisation.

Students will have to appear for examinations in grades III, IV, and VIII, which will be conducted by the assigned authority. Moreover, the board exams for grades X and XII will remain unchanged and are set to get easier in the new system. However, it will be revamped holistically for an enriching learning experience. A new National Assessment Centre, called PARAKH, which is short for Performance Assessment, Review, and Analysis of Knowledge for Holistic Development, will be established as a standard-setting body.

As the colleges and universities move towards becoming multidisciplinary, they will also aim to house outstanding education departments that offer BEd, MEd, & PhD degrees in #education. In addition, the minimum degree qualification for teaching will be a four-year integrated BEd degree by 2030. Strict action will be taken against substandard stand-alone Teacher Education Institutions (TEIs). As per the policy, a new and comprehensive National Curriculum Framework for Teacher Education, NCFTE 2021, will be formulated by the NCTE in consultation with NCERT.

The definition of university is about to undergo a massive change. Now, there will be a wide range of institutions starting from research-intensive universities to teaching-intensive universities and autonomous degree-granting colleges. Over a period of time, it is foreseen that every college will develop into either an autonomous degree-granting college, or a constituent college of a university.

The Government also plans to bring back two crore out-of-school children into the mainstream. There will be open learning for classes III, V and VIII through the National Institute of Open Schooling and State Open Schools’ secondary education programmes equivalent to Grades X and XII.

Multilingualism will be promoted in schools as well as higher-educational institutions. National Institute for Pali, Persian and Prakrit will be set up, along with the Indian Institute of Translation and Interpretation.