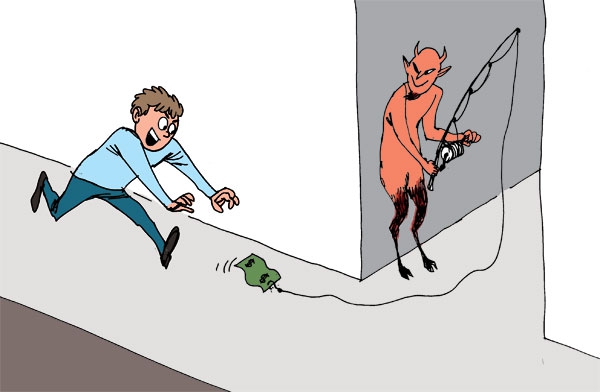 Ethics will have a chance only when personal values are more powerful than temptation.

The moral principles of human beings which govern their social behaviour, are referred to as ethics. Since one person’s moral principles will differ from another’s, the conduct and behavioural patterns of individuals vary even though they belong to the same society. Ideally, such differences should not be vast as the underlying principles remain the same for everyone’s set of values. Still, interestingly, this word seems to have a different definition for everyone. Rather, we all have defined ethics based upon our convenience. Something that suits me or is beneficial for me to be pursued does not fall into the bracket of being unethical until it stops serving my purpose. But is it true? Is there a situation-driven definition for ethics? Or are ethics real rock solid elements, which do not change their property despite all odds?

A young employee in my previous organisation was asked to report to me on the charges of stealing something from his department. His manager informed that the person was caught red-handed and there were witnesses to the incident. On coming to know of the theft, his department head, a senior manager, also called me to emphasise that I take strict disciplinary action as he wanted to create an example out of it. I was happy that this senior manager wanted to establish a no-tolerance policy on unethical behaviour. The matter was dealt with as per the prescribed rules. A week later, a manager from the same department was caught misappropriating funds issued to him for company work. It was an unacceptable deed and called for strict and appropriate action. But ironically, the same senior manager asked me to be lenient this time! When I asked why, the only reasoning he gave was that the person involved was a manager. I was shocked. I could not understand the reasoning. How could there be different treatments for a isimilar act? Do we change our definition of right and wrong based on the rank of the person involved? Anyhow, I ensured that the manager got a stricter treatment for his act than the previous boy since abuse of authority and power by those who possess the same calls for harsher punishment. The senior manager was also strictly spoken to about his dual standards. The question here is, why should we use different yardsticks for people at different levels of hierarchy?

One of my friends shared a similar story from his organisation, where an employee was recently asked to leave on proven charges of harassment. A senior manager, on the other hand, was just transferred to another location with a warning for a similar misconduct! How does the gravity of a crime get diluted if the person comes from the so called ’elite community’ of managers? Is it time for organisations to understand and re-write the definition of ethics?

“If you have done some interesting activity in the space of employee engagement, learning and development, employee referral, please share with us at marketing@hrkatha.com.”

I was invited by one of my school seniors to his house for a cup of tea with the family. I could not refuse since he was a senior and I respected him a lot. During the conversation, he proudly told me that his earning is more than even the CEO of his organisation since he looked after land acquisition for his company, where there was a lot of ‘scope’. I could hardly finish the tea. I found it hard to believe that someone holding a high position in a company could indulge in something like this.

An employee was recently asked to leave on proven charges of harassment. A senior manager, on the other hand, was just transferred to another location with a warning for a similar misconduct! How does the gravity of a crime get diluted if the person comes from the so called ’elite community’ of managers? Is it time for organisations to understand and re-write the definition of ethics?

My grandfather was the headmaster in a government primary school in our village. As head of the institution, he used to have government-issued stationery, books, etc. in his office. My father, who studied in the same school for a few years, remembers that they had strict instructions not to even touch the stationery, which was issued by the government for official use. What belonged to them and what did not was clearly and explicitly defined. Probably my grandfather’s income was not very high but his principles surely were.

Many professionals, while working, do not even realise when they divert from the ethical path of professionalism. During a discussion, a colleague shared that in the organisation where his father worked, one of the senior managers had started a company in his wife’s name to supply certain items. Orders were given to his wife’s company exclusively since he was the decision maker. It took years for the organisation to figure this out and deal with it. Thankfully, the organisation acted upon it immediately after getting to know, but there are certain organisations where despite everyone being aware of such anomalies at an individual level, no one has the guts to even talk about them since they are not in the public domain or known to all. Interestingly, the offending managers also know that their actions are wrong but they continue on the wrong path since it serves their interests and nobody questions them.

I always wonder how this kind of negativity creeps into good professionals and makes them indulge in unethical activities. Where have we gone wrong as a society? Are we unconsciously inculcating such attitude in our kids so that they are unable to differentiate between right and wrong? Or is it our fascination for money and materialistic desires that makes us blind and blurs the line? Probably all of the above! In a hurry to be richer than everyone else around us, we have stopped caring about the means. The sad part is that even the most read and learned professionals are not untouched. How else can we explain the recent news of doctors who were allegedly involved in the human organ transplant racket?

Fortunately, the above incidents do not mean that the world is full of such professionals only. We have definitely come across people in our lives with moral characters made of iron. Such people are very clear about ethics. They not only follow the ethical path themselves but also teach us a lot about ethical behaviour through their conduct in day to day affairs. Such people create a very high place in our lives for themselves.

I met such a person at a traffic signal in Jaipur. He was selling something which I bought just to support him. He was to return ten rupees, which he did not have. He told me that he will get the change but the traffic light turned green and I had to move. It was not new for me to forego change like this. But to my surprise, this young person came running after my car at the next traffic signal, which was almost a kilometre away and knocked on my window to return the change. I was amazed. He probably was needier than anyone else but clearly did not want to earn unethically. I can never forget his face.

In my organisation, every single day, money is returned to guests who forget it in the pockets of their trousers before giving them for laundry. Sometimes, the quantum is almost ten times the salary of the person finding it, but fortunately, personal values prevail as they are more powerful than any temptation.

I know some of my colleagues who go through the inconvenience of keeping two phones just to ensure that they do not make personal calls from the phone given to them for official use.

Being ethical does not mean merely being honest at the macro level, but displaying honesty in all our dealings. Leaving early from office without due permission is also unethical. Utilising the time meant for making sales calls to watch a movie is unethical too.

Like any other leadership quality, ethical behaviour also travels and gets repeated or followed by people down the line. Any incident of unethical behaviour displayed by a leader and supported or not questioned by the organisation shall have a long-lasting impact on the cultural fabric of the organisation. In the human resource function, it is critical to not only preach but also to be followed by each member of the HR team. For example, an HR professional who himself does not come on time, has no moral right to counsel other team members on punctuality.

In today’s fast-paced world, where everyone wants to get their work done by hook or by crook, it may be difficult to expect ethical behaviour from everyone around us. But please remember, it is not about others, it is about us. Even if one person is ethical, she/he will inspire a few and the chain will continue. Let us nourish, recognise and highlight ethical behaviour in our organisations and around us, so that we inspire and create leaders with high moral values for tomorrow.

(The author is deputy vice president – HR, The Oberoi Group.)

The value of ‘instant appreciation’ vs ‘awards’ a year later