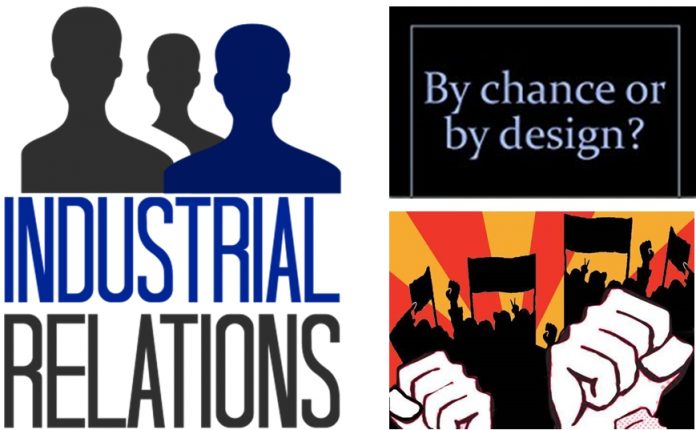 I have seen many organisations bleeding profusely, due to mistrust, non-cooperation and lack of mutual understanding and strengthening. This is basically because of egocentrism and immaturity.

If we examine the behaviour of any organisation, we find that it is an extension of the behaviour of the head of the organisation, because that is the central heart that pumps life to every cell, nook and corner of the organisation. Organisational transformations do take place, but are effective ony with a transformation at the top. Here, we can appropriately recall the famous quote of Albert Einstein, “We can’t solve problems by using the same kind of thinking we used when we created them.”

Late Russi Mody was known for his IR acumen. His famous line, “What is man management? That one must behave naturally with any human being”, is a testimony of people management. At the basic level, organisations, including trade unions, are the expansion of two human beings that seeded the organisation and pulled in the growth around. This is just like two basic elements joining, under the influence of fundamental forces, to organise, assimilate and create atoms, molecules, and bodies that go on to form the Universe.

As we know, Nature has four fundamental forces—gravitational, electromagnetic, weak nuclear and strong nuclear—that generate ‘cause & effect’, and enforce creativity, behaviour and growth in all the aspects of physical existence throughout the Universe. We, as conscious human beings, and as IR managers, must align our approach with these forces, while dealing with other employees, and most importantly with the self. Anything and everything done in tune with these forces are naturally ‘Dil Se’, and bound to succeed.

Our basic constituent, the atom, is made up of three types of sub-atomic particles—positive protons with neutral neutrons at the nucleus (core), and negative electrons revolving around this nucleus. More than 99 per cent of the mass of an atom is contained in the dense nucleus. However, the cloud of electrons that ‘orbit’ the nucleus and define the ‘size’ of an atom is roughly 100,000 times larger than the atom’s nucleus. The first atom of the Universe, after the big-bang, Hydrogen, is the smallest atom, which has one proton as nucleus, with one electron revolving around.

The ‘Strong Nuclear Force’ makes the nucleus of an atom by keeping all the positively-charged protons together. This strong interaction is mediated by the exchange of massless particles called gluons. This is the strongest high- energy force, but with a short range limited to the core. The ‘weak nuclear force’ stabilises the atom through radioactive decay, where neutral neutron in the nucleus transforms into proton and electron. This is the second weakest force, but with a short range. The ‘electromagnetic force’ keeps the electrons orbiting around the positively charged nucleus through photonic mediation. This is the second strongest force, but with infinite range. The ‘Gravitational Force’ is the force of attraction between all the objects from atoms to planets. This is the weakest of forces, but with infinite range.

These fundamental natural phenomena endorse the efficient working model for societal structures, right from a nuclear family to colonies, societies, organisations, associations, trade unions, nations, and worldwide humanity at large. The societal structure starts building up with a parental person as promoter and an associate aligning to that person, at the centre. Once this association moves forward, other offspring, associates and interested parties get associated in building this organisation. More relations and links enhance the mass, structure and gravitational pull of the organisation.

As long as the core of the organisation remains positively strong and intact, the organisation maintains its existence and growth through its stronger nuclear force. This central force keeps the entire organisation intact with the common central pull and coordinated effect. Wherever the central core is weak, the organisation gets dismantled with escapism. Sometimes, the external factors destroy the centre, and disintegrate the organisation, as we see in the case of devastating atom bombs.

Likewise, the trade unions succeed or fail because of non-committal or incapable core leaders, or due to strongly engineered external impacts, majorly from the rival unions or the company managements. As atoms create body, the union and company management must collaborate ‘dil se’ to create a fine tune, to keep the organisation strongly cohesive and growth oriented. The weakness, if not attended to properly, may lead to disintegration in due course of time. However, a mutually intensified organisation, has its own effective gravitational force to attract growth opportunities. The management must support the union leaders and vice-versa to remain positively strengthened to align every force towards common stability and growth.

I have seen many organisations bleeding profusely, due to mistrust, non-cooperation and lack of mutual understanding and strengthening. This is basically because of egocentrism and immaturity. At many a new set up, the management puts all its energy into stopping the formation of the workers’ union. In this pursuit, they often establish bad practices, lose their peace, productivity, and most importantly, the credence of togetherness. How can a body become healthy with different organs behaving in an unsynchronised manner? The first condition of togetherness is common standards for behavioural expressions. Double standards are bound to lead to controversies.

Once I joined a company just before its workers’ union election. This was also the ‘long-term settlement’ (LTS) year. The workers’ union led by a political stalwart, known as Tiger (so and so), won the election. This ‘Tiger ….’ was not an employee, but a renowned politician, an ex-parliamentarian, minister, and the member of the national ruling party. He was also supported by the local Member of Legislative Council (MLC) of the State. His trade union advisor was a famous trade unionist.

Soon after getting elected they raised the ‘Charter of Demands’ to the management, which I was to negotiate and settle on behalf of the management. I was told that the ‘Tiger ()’ was the person who, at an earlier LTS occasion, got the agreement signed—true to his nick name ‘Tiger—by showing and putting his loaded revolver on the table of the then plant head. So, I decided to first meet him alone, before any formal negotiation. He used to live at the capital city of that state, as far away as 400 km from the plant location. I rang up and took an appointment to meet him alone, at a time and place of his convenience. He preferred to come down to my local office in his native city.

We sat for about an hour and a half, chatting comfortably. I was as courteous, respectful and hospitable as could be. While leaving, he commented “Mr Singh, you gave me full respect and courtesy, which I did not expect before coming here. Rest assured, this agreement will be concluded the way you prefer.’

It took few months and dozens of meetings to conclude this LTS. He did not take a single penny from us, not even his travelling conveyance, and he the matter settled as per my design. There was a moment when I saw him shouting at his co-members, and leaving the meeting room in anger, to get the union committee members to agree to my contents. When the LTS got signed, his trade union advisor friend, an old man in his seventies, actually stood up from his chair and saluted me, saying, ‘Singh saab, hats off to you. During my entire trade union career, I never saw a manager, such as you, who got such an agreement signed through me, in favour of the company’.

When I e-mailed the signed agreement to the managing director of the company, he was surprised and full of praise. I know, I did nothing extraordinary in this case for any one, but I took care of three very important factors—

1.      Managed the ego and self-respect of the leaders.
2.      Fulfilled the expectations of every stakeholder within the given limits.
3.      Linked the individual and common packages to the productivity norms for the first time in that company.

We human beings, as a natural creation, move emotionally,  towards any fundamental concern. It comes to us naturally. Let us not gamble with people hypocritically. Let us listen to our innocent hearts to resolve a human issue, ‘Dil Se’. Anyway, our ‘Dil’, the heart, is the first organ that we got when we were in the womb of our mother. We started communicating first through the beats of this organ, our heart. Let us believe and rely on this innocent organ, which will never let us fail until we leave the world finally.

Every natural entity, including we human beings, communicate with another entity more subtly than explicitly. This communication takes place at the universal electromagnetic energy form, as within own atoms. That is why, with our focussed attention, we are able to influence the people discreetly. Most probably, intuition, foresight, vision, hypnosis, and so on, work under this very influence.

We have the best live example. Even in the ancient past, in the absence of mass communication gadgets and professional techniques, Gandhi Ji was able to communicate instantly with the masses spread all over India, with the same intent, to start a ‘satyagraha’ or stop a vigorous riot effectively. He was a man working genuinely through his ‘Dil’! Why can’t we do the same today?

6 HR lessons from the movie, Dangal