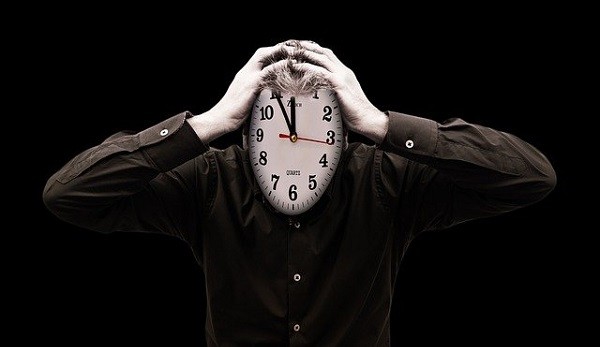 While one third of workers in India are suffering from increased burnout, as revealed by the Microsoft Work Trend Index report, it is heartening to see that a good majority has also zeroed in on the solution. A whopping 92 per cent feel that meditation can reduce stress. In the past six months, professionals around the world have experienced more burnout, primarily because the line between official work and domestic responsibilities has blurred. It is definitely taking a toll, on some more than the others. Most Indian workers are afraid they will get infected with COVID-19 at work and resent the way the line between personal life and official life has blurred.

Let us look at some of the interesting findings of the report, starting with the slightly positive one. 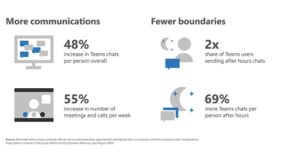 Meditation: While stress and burnout are on the rise, of the total number of respondents in India, 92 per cent believe that meditation can not only reduce stress but also improve the ability of people to respond to negative feedback. So, there is definitely some sort of solution in sight.

Varied levels of burnout: Amongst the nations surveyed, India has the longest work day span, while Germany has the shortest. For India, the workday span has increased by an hour, which is why about 29 per cent of workers in are experiencing more burnout at work. Workers in Germany did not experience much stress or burnout as there was very little change in workday span. The highest increase in workday span was in Australia, but surprisingly, there was only medium increase in burnout. Clearly, different countries are reacting differently.

In Asia, it is India that has the highest percentage of workers experiencing burnout, when more than 6,000 information and first-line workers were studied across eight countries. A significant 41 per cent Indian workers admitted that it was because personal work and official work were not separated that their wellbeing was getting affected.

Fear of infection: Workers in India are highly stressed out because of the fear of getting infected at work. The fear of isolation and separation from co-workers is stressing them out. While 42 per cent are afraid they will contract COVID-19, about 35 per cent are scared they will be isolated and disconnected from their colleagues. About 19 per cent of the workers have not been educated about social-distancing norms or provided personal protective equipment, which is also causing a spike in stress levels. 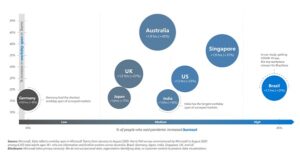 Workload: While 28 per cent workers complain of long working hours and too much workload, about 34 per cent believe the lack of separation between and personal life was the main reason for stress.

Almost 23 percent of workers were stressed out due to too many meetings and lack of time causing them stress.

Calls and meetings: Professionals are attending more meetings and taking more calls than they did before the pandemic. The number of chats after working hours and chats between 5 in the evening and midnight have gone up too.

Lack of commute: Commuting has actually helped increase productivity according to research. Research has found that when a digital assistant helps professionals prepare for work while on the way to office and detach from work on the way back, their wellbeing and productivity went up. Productivity actually increased by almost 12 to 15 per cent.

It is clear that the new normal has affected professionals in more ways than one. It has affected different people in different ways, depending on their work, personality and geographical location. May be organisations should focus more on scheduling in a little time for meditation. After all, most professionals do feel it will help restore some balance to their hectic lives and relieve them of some amount of stress.

What employees think of their top management

Everyone loves the recruiter’s call