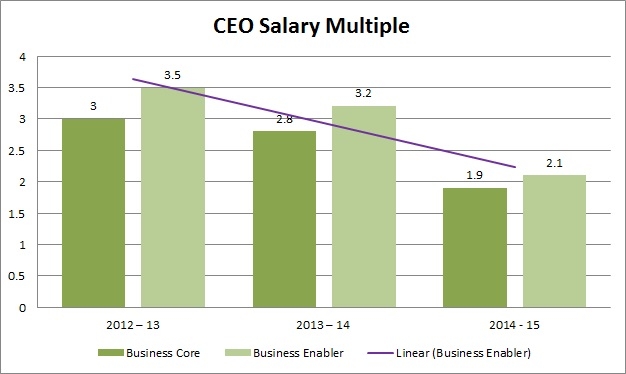 As per a study by Hay Group, the core business heads and top business enablers in a company are considered to be equal stake holders in growth, which is why the gap between their salaries is now marginal…

This implies that Indian companies now considered both the core business head and top business enablers, an equal stakeholder in business performance of the company.

The business core team comprises of sales and marketing head, manufacturing, operations, and other business heads, while the business enabler role includes that of the head-human resources, head –R&D (Research & development) and chief information officer.

As per Hay Group, a global consulting firm, the gap between the salary of the managing director/ CEO of a company and that of the core business heads has reduced from 3 times to 1.9 times between fiscal 2013 and fiscal 2015. The decline in case of business enablers has seen a sharper from 3.5 times in FY13 to 2.1 times in FY15.

Hemant Upadhyay, managing consultant and leader of executive rewards practice, Hay Group India, says, “This indicates that Indian companies now consider the role of a business core group and business enabler as critical to business performance and so they should be rewarded and retained accordingly.”

Upadhyay adds that the economic outlook in the country is positive and organisations believe that the stable government will give a spurt to their business prospects.

The other significant change in the salary structure of the senior management of Indian corporates has been the increase of variable component.

Normally, the fixed component in the salaries of the top executives in India has been higher than that of their counterparts in other Asian, European and American economies. But this trend seems to be changing off-late.

The cash component in the salary has now increased for top Indian corporate bosses and the next line of managers in the last few years.

This implies that there is direct alignment between the goals of the company and the compensation plan. Besides, the objective is also to ensure that compensation of the top executive is commensurate with the contribution and impact of the role.

Indian companies are now trying to be more transparent and efficiency oriented for a better application of benefits.

“Instead of looking at benefits as level entitlement or the differentiator between grades, organisation are consciously moving towards focussing on benefits, which either provide efficiency or drive productivity and monetise the rest,” says Upadhyay.

“This has resulted in reduction of required administrative bandwidth,” he adds.

Organisations are also using some of the benefits and perks as tools to recognize employees for good performance or demonstrating the right behaviours. The attempt is towards utilising these benefits to drive role model behaviours in the organisation.