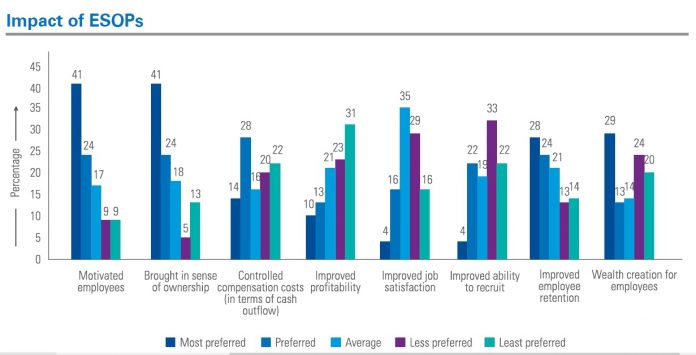 A sizeable part of India Inc. considers ESOPs as a great motivational tool and performance enhancer. While 41 per cent have successfully tested it as a motivational tool, almost 10 per cent confirm its effectiveness as a tool for increasing profitability.

Employee Stock Option Plans (ESOPs) or Equity Incentive Plans have been gaining ground with India Inc. Both Indian and MNCs in India are using it as a compensation tool for enhancing retention, enabling high performance and wealth creation and inculcating a feeling of ownership amongst employees.

Around 46 per cent of India Inc. have either implemented an ESOP or were planning to introduce a new plan, states the second edition of the ESOPs survey done by KPMG — the first survey came up in 2010–11.

Parizad Sirwalla, partner and head–Global Mobility Services, Tax, KPMG India, says, “The recent changes in the provisions of Company law, providing clarity and alignment with the Securities and Exchange Board of India (SEBI) Guidelines on ESOPs, will continue to make ESOPs an important compensation tool for attracting and retaining employees.”

The encouraging fact is that a sizeable part of India Inc. considers ESOPs as a great motivational tool and performance enhancer. Close to 41 per cent of the respondents confirmed that ESOPs have definitely motivated their employees towards better performance, and nearly 10 per cent indicated that they have improved the company’s profitability. In addition, around 69 per cent of respondents opined that ESOPs have improved retention and brought in a sense of ownership among their employees. On other parameters, such as improvement in productivity, profitability, job satisfaction, ability to recruit, controlling compensation costs, etc., the respondents had a neutral opinion.

The survey reveals that ESOPs are most popular in ICE companies followed by financial services and the private equity sector. Manufacturing and consumer goods companies as well as health and life sciences companies are also increasingly introducing ESOPs to their employees. However, other sectors are yet to catch up on this front.

Among the Indian companies that have initiated ESOPs, a majority of them (53 per cent) are privately-held firms. 37 per cent are public listed companies and the remaining 10 per cent are unlisted public companies.

The basic approach and perspective of stock options for employees is quite different for the Indian companies and the MNCs with operations in India.

When it comes to selecting employees for the stock options – the level and performance of the employees was seen as the most important criteria. Nearly 27 per cent of the respondents confirmed that the main criterion for grant was the level of employees, and approximately 18 per cent of the respondents indicated performance as another major criterion. Years of service and employees’ salary levels were other criteria to select an employee for stock options.

Around 68 per cent of the companies that introduced stock options generally consider an annualised grant to link this with the performance cycle of their employees. Nearly 63 per cent of review their stock options annually, while another 20 per cent do the same once in three years. Only 17 per cent of Indian companies go in for a bi-annual review.

The respondents indicated that, of the 63 per cent unlisted companies, 25 per cent use their audited financials to inform their employees of their company valuation.

Generally, annual audited financials are used as a basis for valuation of shares and communicating to the employees. It is observed that many unlisted/private companies do not keep their employees informed of the valuation of the shares.

Amongst the different types of plans, the majority of respondents had a vesting period of three to four years for the options/stocks. On a uniform basis, though, the majority of the respondents – around 71 per cent – indicated that options were vested annually. However, a sizeable portion of respondents (20 per cent) also mentioned ‘cliff vesting’, i.e. at the end of the specified period.

However, in terms of scope of improvement, Indian companies continue to adopt conventional equity-linked plans. They are yet to evolve plans, which are linked to warrants and other securities that carry a lower risk of fluctuation as compared to equity shares.

‘Give us the latest technology or we will quit,’ say digital...