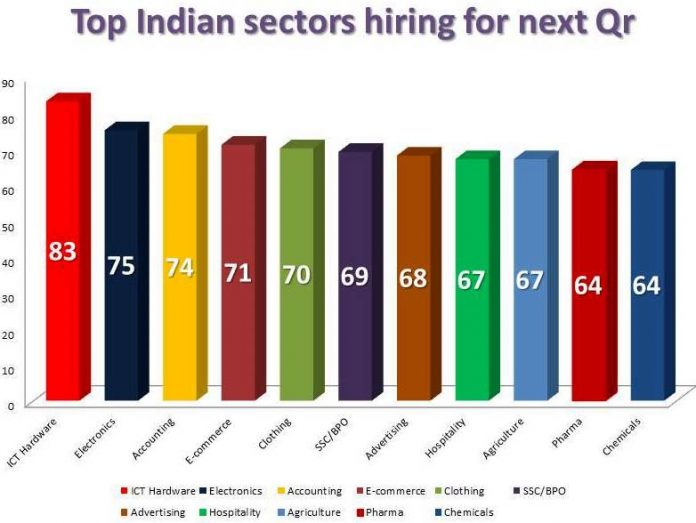 Around 38 per cent of participating companies plan to fire managerial-level employees, while there will be only 29 per cent reduction in the workforce in the current quarter. Speed of hiring is expected to go up from 62 to 88 per cent.

Indian companies will hire as well as fire more than their counterparts at the APAC and global levels.

Globally, the current firing level is at 21 per cent, which will also reduce to 19 per cent in the next quarter. In APAC, the firing percentage is also expected to come down by four points.

In Western Europe, Netherlands is quite buoyant on hiring as 79 per cent of the respondents currently plan to hire, followed by Switzerland (70 per cent) and the UK (64 per cent). The lowest level of hiring is in Italy at 35 per cent. This reflects the economy’s reliance on the financial sector.

The job market is currently faring well in Germany (53 per cent), with a number of sectors being highly active: most notably, packaging and banking, with 90 per cent and 86 per cent of businesses taking on new staff, respectively.

In Eastern Europe, the highest recruiting levels were in Poland (71 per cent) and the Czech Republic (63 per cent). Across Poland, the utilities and SSC/BPO sectors currently hold the highest figures for hiring new staff at 92 and 91 per cent, respectively.

Due to Hungary’s economic problems, it had the lowest level of hiring in the region with only 31 per cent of businesses questioned, actively seeking new managers or professionals.

Back in India, the next quarter’s hiring spree will be led by ICT, electronics and accounting. In the accounting sector, where the current hiring share was 74 per cent, there will be a further increase to 79 per cent in the coming quarter.

E-commerce will continue to be among the leading hiring categories, but is expected to slow down a little. Currently, 73 per cent of the e-commerce companies are hiring now but by the next quarter, the number is expected to come down to 71 per cent.

The study also revealed that there is a shortage of experienced professionals in several key disciplines such as accounting & finance, human resources, operations and sales & marketing. On the other hand, in sectors such as construction and banking, there will be an increased level of competition with available professionals exceeding the available number of jobs.

In India, a total of 2,292companies were interviewed to find out the hiring trends at the professional and managerial levels. At the global level, 9,570 companies from major markets participated in the survey.

Being part of a team increases engagement levels: Study