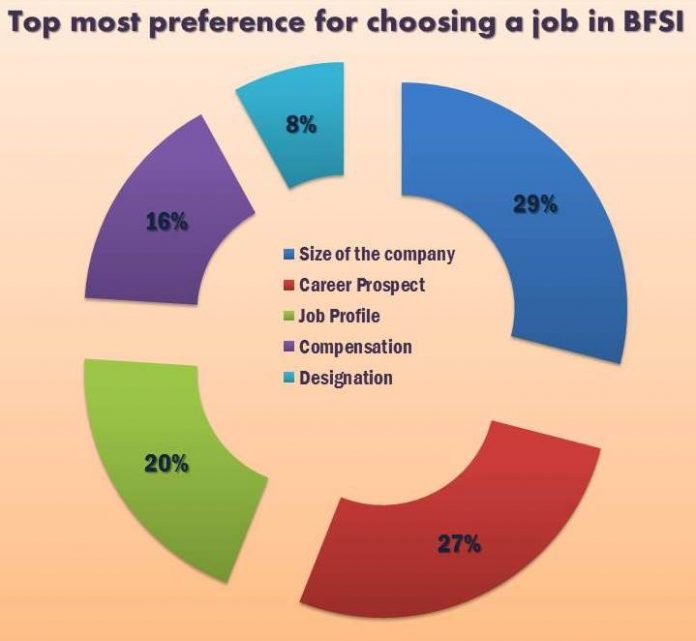 Around 29 per cent of the respondents rated the size of the company as the most important factor while joining or switching companies, whereas 27 per cent felt career prospects was the topmost priority.

The brand or the nature of the company isn’t the priority for job seekers or holders in the BFSI sector. According to a survey among employees from this sector, around 73 per cent of respondents opted for job satisfaction over the fact that their existing company was an MNC, a private Indian organisation or a public-sector company.

Employees in this sector are not only satisfied with their company but also have a predilection towards the sector. The survey reveals that for an average BFSI employee 5–10 years is a normal tenure to stay put with one organisation. In addition, close to 43 per cent of the respondents said that they are likely to continue with the same industry in case they are looking for a change in job. Only 34 per cent of the respondents opined that they may consider changing the industry provided their other interest areas are met.

When it comes to compensation, a quarter of respondents felt 20–30 per cent was a good enough raise, while 42 per cent of the respondents expected a 30–50 per cent hike —anything less would force them to look for other options. Around 21 per cent wanted more than 50 per cent raise while 1 per cent were likely to change jobs irrespective of the hike.

In terms of motivating factors, strong learning and development programmes were the most effective motivation tools for 32 per cent of the respondents. Around 23 per cent felt salary above market standards was the ultimate motivational tool to be more productive and result oriented. Of the remaining 19 per cent, 14 per cent and 12 per cent of the respondents, movement across functions, flexible working hours and high variable pay were the topmost motivational factors, respectively.

The survey was conducted by My Kind of Job, among 300 middle- and top-level executives from the Banking, Finance and Insurance sector.

How to make the workplace digitally efficient and secure