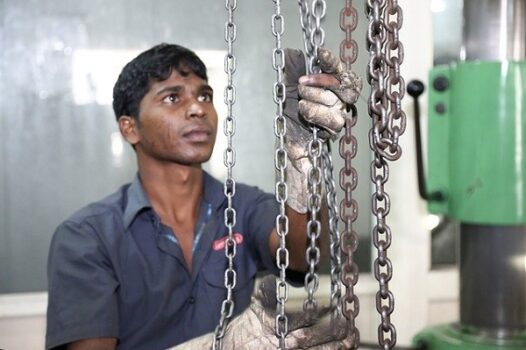 Discussions around the concerns and challenges for employees while working from home, have filled the internet in the past few months. There is seldom any talk of what life looks like beyond the white collar. While most of us are working from home, the men in blue have been trudging around in their boots working to keep organisations running.

What would be the biggest concern or priority for an employee at a plant or a factory at this point of time?

Well, for the most part, it would be the same as any other employee — to keep their jobs. However, on unravelling the nuances of the matter one comes to understand that the stakes are higher for these workers. Moreover, the implications of working during the pandemic vary for permanent employees and contractual labourers.

“Organisations have started to realise that they do not require a large contractual workforce to keep functioning. A large workforce of that sort was a luxury earlier.”

The impact of the lockdown and the resultant downsizing efforts have been felt harder by the contractual workforce in the factories and plants. Across sectors, contract workers have been disengaged in large numbers. Many of them have had to return to their native places or hometowns early in the lockdown period. Those who remain available to organisations, are being employed at a much reduced capacity and in a staggered manner. This means, instead of the earlier six days a week routine, they are now engaged for a maximum of three to four days in a week, and that too, on the basis of company needs and requirements.

However, there is no avenue to complain. If out of a 100, only 30 are employed, they are still content. For these low-skilled employees, the nature of work is obligatory, because they have no other choice. Nihar Ghosh, president-HR, Emami, says, “Compared to the unemployed migrant workers, the contract labourers are in a much better position. Having a job is the prime concern for them.”

Their low level of skills coupled with the sheer availability of extra labour to the companies, further reduces their bargaining power. The power structure becomes even more unequal on comparing with that of a permanent employee. Contractual workers can be brought on board and removed more easily than the permanent employees at a plant.

It will suffice to say, that the permanent employees are in a better position when it comes to their counterparts. Their being unionised gives them more bargaining power.

In some ways, the work of a blue-collar employee is more stress free than that of a white-collar worker. Apart from the uncertainty of job security, which is now common to all, there is less stress related to the work per se for a plant worker. On the other hand, the increased complexity of work for a corporate employee makes it more stressful to even work from home. In addition, there have been instances of permanent corporate employees being laid off over emails and telephone calls. Removing a permanent plant worker, by contrast, is more difficult because of the unions.

Another aspect that has come to light is that the permanent employees are feeling more reassured of their jobs now. This is because, the diminishing capacity of contractual workers in the factories has led to organisations getting the permanent workers to handle the tasks, which were earlier being handled by the contract workers.

“The blue-collar workers are more organised and disciplined in following rules and regulations in this regard.”

Ravi Mishra, SVP-HR, Grasim Industries, Epoxy Business, Aditya Birla Group, says, “Organisations have started to realise that they do not require a large contractual workforce to keep functioning. A large workforce of that sort was a luxury earlier.” Work, which was earlier being performed by contract workers is now being taken care of by the permanent staff.

Emmanuel David, director-HR, Tata Management Training Centre (TMTC), highlights an interesting impact of the new way of work on the blue-collared workers. He says that although employees are receiving their regular salaries, their expenses have increased, despite staying at home more than ever before. While workers earlier used to receive their meals at the factory or plant itself, they are now forced to prepare their own meals at home, incurring extra expenses in doing so.

“There is an element of self-esteem and self-respect among blue-collar workers. Rather than accepting money from the organisation for sustenance, they are more willing to work for it and earn it.”

Union’s response to the situation

Ghosh says, “Union leadership has responded well to the situation and are aware of the conditions in which companies are operating.”

In addition, the unions have been quite proactive in making sure that workers follow all safety protocols and health measures at the factories. “The blue-collar workers are more organised and disciplined in following rules and regulations in this regard,” points out Ghosh.

Mishra agrees that unions have been much more understanding of the situation and of the plight of companies who employ them. “There have been cases where union leaders have considered deferring yearly increments in light of the economic situation,” he shares.

Adding to the narrative, David says that union leaders also have the best interests of the organisations in mind and are only concerned with securing the livelihoods of the workers. He draws our attention to yet another aspect of the plant workers, which was highlighted in a conversation between him and a union leader. “There is an element of self-esteem and self-respect among them. Rather than accepting money from the organisation for sustenance, they are more willing to work for it and earn it,” he explains.

The situation is an atypical one and workers, including the union leadership, are aware of it. HR pundits agree that understanding between the management and the workers has been much more than before. Both are willing to make a few sacrifices for the betterment of the organisation.

Employee verification: What do companies look for?

Why Maersk is demanding merchant navy professionals be recognised as essential...