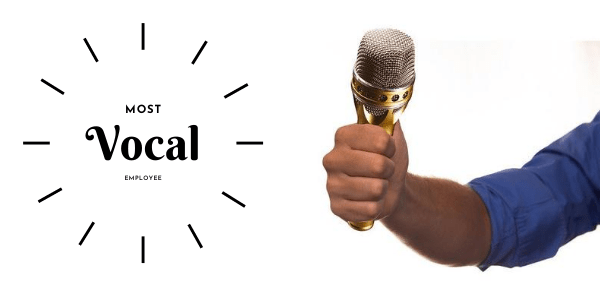 Be it a bottom-up culture, a culture of courage or an innovative organisation, they all need one thing in common — employees who are not afraid to speak their minds. Leaders talk about the importance of giving employees the space to voice their opinions, which allows the company to innovate and progress as an organisation.

Why not award the employees, who speak their minds? It will be a direct and visible way for the organisation to say that it follows the principle of encouraging a ‘speak up’ culture in practice as well.

Employees can be given incentives in many forms, to voice their concerns and thoughts — more responsibility, a promotion, or a token of thanks, such as a small gift or an appreciation letter.

“Recognising the employees on a public platform can be effective in the area of business innovation and process improvement. It can encourage employees to think like leaders.”

By launching an award for the same, the organisation is recognising employees on a platform visible to their peers and colleagues. In essence, this conveys the message that everyone is a decision maker and that the senior leadership is willing to listen and respond positively to criticism. The public effort to reward is bound to make people more comfortable with voicing their concerns.

As a concept, there are areas that will still require tweaking. However, in the longer run, it will have the potential to live up to its benefits.

Kamlesh Dangi, CHRO, Incred, says, “It is an interesting concept to think about, and despite few potential fallouts, in the longer run it can benefit and encourage people to speak up more.”

Sushil Joshi, senior HR leader, agrees that the concept can serve a greater good. “Recognising the employees on a public platform can be effective in the area of business innovation and process improvement. It can encourage employees to think like leaders,” he points out.

Benefits of a ‘speak-up’ culture

One of the first positives is that it will help foster a culture of courage within the organisation, and do away with the employees’ fear of speaking their minds.

Too often, employees are afraid to rock the boat for fear of causing trouble. They are reluctant to state their opinion even if they see a problem. In today’s times of uncertainty, this may take on a new meaning, as people are afraid to lose their jobs. When the company is willing to give positive recognition to someone for speaking up about a difficult subject, it will encourage even the quiet and shy ones to voice the inconsistencies they notice in the system.

Second, it builds ownership and accountability among the people by default. A sense of confidence emerges among the employees, because they feel they are able to shape the decisions the company makes. This, subsequently, increases the sense of ownership among the team members. Of course, as most practices, it has to come from the top. Leaders have to be willing to listen and create an environment of comfort and safety. This will ultimately result in a delightful cocktail of faster decision-making, self-direction and focus on the output rather than the process. People will realise that it is okay to bring things to the notice of the management

Third, it is a huge boost to the inclusion efforts of the company. It is a given that if employees are encouraged and enabled to act, they will be less tolerant of injustice at the workplace. Moreover, it may make people more conscious of their behaviour and actions, while interacting with their colleagues.

“It is an interesting concept to think about, and despite few potential fallouts, in the longer run it can benefit and encourage people to speak up more.”

Drawbacks of a ‘speak-up’ award

Of course, not everything is bright and sunny and the concept of awarding employees has a few potential downsides.

“A potential fallout of this could be, ‘backbiting made official’, where even minor matters are made public,” warns Joshi.

More cases of transgression or unethical behaviour will come to light, along with process improvement or business innovation suggestions. Not every issue will be worth looking at and even minor matters may be sensationalised. Workers will try to nitpick on their colleagues’ behaviours or actions in the hope of gaining recognition, and a crab mentality may emerge.

If such cases continue to crop up, office politics around the award may take an ugly turn. There can be political angles around a particular person speaking up if it is against another individual.

Dangi adds that if such a practice is adopted, organisational processes will also need to be relooked at. “A company will need to ensure that the people do not face any repercussions for speaking out, and guarantee a safe environment for them,” he says.

Lastly, the very culture of the company may stand on a cliff. Since everybody will want to improve some aspect within the system, whether minor or major, there may be too much focus on the negatives. Essentially, rather than constructive criticism or helpful feedback, the company will end up listening dealing with several complaints.

While it may seem like quite the double-edged sword, almost every new idea usually is. In the larger context, such a practice may benefit the organisation more than impede its progress.

HR pundits suggest a few points, which should be looked into first.

Joshi suggests the idea of coaching employees to deal with minor issues at a peer-to-peer level. Due to potential ego conflict, employees may be less willing to heed their peers. Coaching can help take care of minor issues at the employee level and prevent sensationalisation.

Dangi points out that similar to an appreciation framework, companies need to create a framework around what all employees can speak up about. This will encourage a culture of speaking out and provide a positive outcome from the practice rather than making it a fault-finding mission for employees.

A ‘most vocal employee’ award can be an effective way to encourage a ‘speak-up culture’ in an organisation. With a well thought out framework in place, such a practice can deliver good results in the longer run and foster the development of a healthy workplace within.

The case of missing CEOs in healthcare