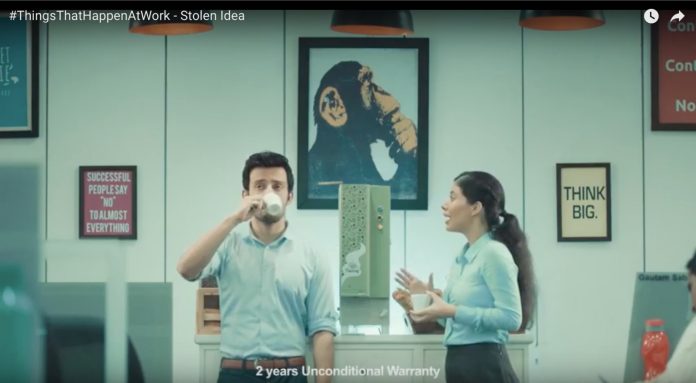 The digital ad series is a satirical take on common workplace issues—gender bias, cons of bureaucracy and lack of transparency.

Ad films promoting products and services are common, but films that promote a Company’s unique work culture is something rare.

CEAT Tyres has launched three films that that gives expression to its organisational culture. It claims that malpractices, such as gender discrimination, lack of transparency and bureaucracy are not part of its workplace and this is what ensures a great work culture—one that most working people dream of.

The simplest of things related to how people behave in the workplace, mostly go unsaid and unnoticed, but make the biggest of differences in the organisational culture. The films bring these small yet deeply impactful things into the limelight.

The digital advertising series is broken down into three videos of 25 to 35 seconds each, with a satirical take on common workplace issues—gender bias, cons of bureaucracy and lack of transparency.

Our constant endeavour is to stay relevant to all people who are part of our family. In order to do so, we engage in frequent conversations with them. These videos are based on insights from our employees, on what they like about working at CEAT. We believe it is a clear expression of our culture.

Milind Apte, SVP human resources, CEAT Tyres says, “Our constant endeavour is to stay relevant to all people who are part of our family. In order to do so, we engage in frequent conversations with them. These videos are based on insights from our employees, on what they like about working at CEAT. We believe it is a clear expression of our culture.”

Apte tells HRKatha that the RPG Group, of which CEAT is one of the subsidiaries, stands for a number of strong people practices and that flows down into each of its group companies as well. He shared that an analysis revealed that many people who worked with CEAT and left are also willing to come back into the organisation. “We observed that people have happily come back into the organisation despite no rise in their previous compensations or designations,” Apte reveals.

In addition, CEAT has a much lower attrition rate compared to the industry. With eight per cent attrition rate, and people desirous of coming back, Apte wanted to understand exactly what really made people stay and even return after having quit.

“This quest further led to the realisation that there are various unique and unsaid practices in the workplace that people appreciate. We felt that these practices make a huge difference and we needed to share these with our existing and prospective employees,” Apte says, explaining what led to the creation of these films.

It’s the CEAT way of working that ensures that none of these malpractices or misbehaviours disturb the work environment. According to Apte, in order to instil these values in each of the employees—so that the culture becomes a part of each employee’s personality— every new joinee at CEAT undergoes a 45-day induction programme on the ‘CEAT way of working’.

The CEAT way of working has two major pillars – QBM or quality-based management, and the CAIRO values (challenger, aspiration-led, integrity, result-obsessed and openness). Together, these ensure that the right kind of behaviour is displayed across the organisation. “The leadership demonstrates these values and behaviours, and it flows down from thereon,” he says.

Making everything appear effortless requires a mindful approach, and huge back-end effort to ensure such a culture across the organisation. While this involves a lot of work, the films are hard-hitting and quickly cut to the point that most working people will be able to relate with.

Giving a humorous twist to some of the glaring issues in the current workplaces, this campaign is designed to connect with a larger audience. This first-of-its-kind digital ad series will be broadcast on popular social media channels, such as YouTube, LinkedIn, Facebook and Twitter.

How IBM looks at diversity and inclusion