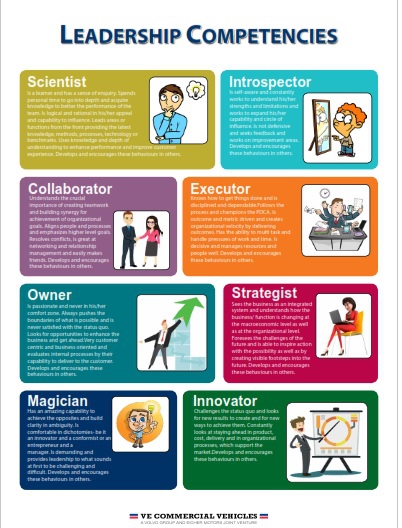 The automobile company has done away with redundant bookish terms and renamed the competency levels with comprehensive adjectives such as scientist, introspector, collaborator, executor, owner, strategist, magician and innovator.

Organisational capabilities need the support of a judicious mix of competencies. What most organisations do is that they define these competencies too tight or too wide. It is based on the assumption that there is no overlap between two competency levels where as the reality is that they may actually be fuzzy and difficult to separate from one another – a crucial factor, why many companies fail to build on their organisational capabilities.

Kinjal Choudhary, senior vice president & CHRO, VE commercial vehicles opines that the inability of define competency has emerged as one of the biggest challenges in ensuring training acceptance and applicability.

He says, “Employees fail to relate with these ‘so special’ competencies which is why there is no motivation to hone their proficiency. In addition, managers are clueless in terms of evaluating their teams on such behavioural competencies as they feel they aren’t equipped.”

Volvo Eicher Commercial Vehicles (VECV) has recognised these ‘overlaps’ as a characteristic of behaviours and has taken the approach of archetypes. Instead of the usual terminology for competencies, the company drew out behaviour sketches for each kind of competency that it needs.

To explain who a collaborator is, Volvo Eicher used examples from the movie Chak De, where the coach is a man who is able to bring together people from different backgrounds and with different motives, to work together towards a common goal. He is able to channelise their energies well.

VECV has replaced the bookish competency levels with comprehensive adjectives that people can relate to. The eight leadership competencies at VECV were given new names—scientist, introspector, collaborator, executor, owner, strategist, magician and innovator. The behaviours respective to each of the competencies have also been defined well.

Choudhary shares that these competencies were uniquely socialised more as an employee engagement activity rather than plain vanilla education or awareness sessions. Apart from using interesting adjectives to address the competencies, the idea was marketed internally in a very unique way to create a buzz around the same. Posters, standees and competency booklets were used to create excitement across locations including plants and sales offices.

In order to ensure simplicity and relatability in content, it was tailored to be light but laden with examples from films, sports and so on.

The idea has been received well by people at VECV as 92 per cent of their target population, which is close to 2137 employees across the country, have already participated in these workshops spanning 45 days. This is approximately 4500 man-hours of engagement.

Divya Mohan, head -talent management and PMS, VE Commercial Vehicles, shares that they used examples from movies, based on their relevance in the respective competency and its related behaviours.

“For instance, to explain who a collaborator is, we used examples from the movie Chak De, where the coach is a man who is able to bring together people from different backgrounds and with different motives, to work together towards a common goal. He is able to channelise their energies well,” she elaborates.

Similarly, for explaining the role of an executor — someone who is able to get things done on time and in the right fashion — they used an advertisement. The TV commercial of MTR, where a woman is able to churn out the family’s varied demands for breakfast with ease as she follows a process and a plan shows how executors are able to multi-task and get things done as desired.

“It was purely through in-house content and internal facilitators that we used innovative content to bring alive an otherwise heavy subject of competencies,” Mohan opines.

The idea has been received well by people at VECV as 92 per cent of their target population, which is close to 2137 employees across the country, have already participated in these workshops spanning 45 days. This is approximately 4500 man-hours of engagement.

Choudhary shares that they also conduct daily online quiz competitions on these competencies, wherein they receive an average of 400 responses every day. The excitement and level of engagement is such that despite the quiz not having a reward but just some recognition associated with it, people are still keen to participate.

“In addition, unlike most organisations which tag leadership competencies to various designations and roles, we mandate applicability of all the eight competencies across grades and levels. We also recognised that the behaviours in which these competencies will manifest themselves, will vary from level to level,” Choudhary adds.

To bring more objectivity into the exercise, the company has pegged down the various expected behaviours to be demonstrated for each of these eight competencies at every level.

This uniform approach helps in focusing on developing leaders across the rungs and not just concentrate on pockets. “It also helps in raising overall organisational velocity as we have made evaluation of these competencies a part of our PMS. We just cemented the understanding further by building our learning interventions around this framework,” Choudhary says.

Mohan adds that VACV has designed immersive in-house leadership development programmes with internal facilitators around these competencies and have delivered over 3700 man-hours till now.

These leadership competencies are now being used for 360 feedback to further identify development needs and then develop customised interventions for the future leaders as well.

The Company is now using competencies to develop leaders for tomorrow across all levels, by integrating the framework with succession planning and high-potential identification.

Hopefully, all this should help establish competencies as a way of life at VECV and not just as an ‘HR thought’ applicable to a select few.

Culinary craft: The new tool for learning and development