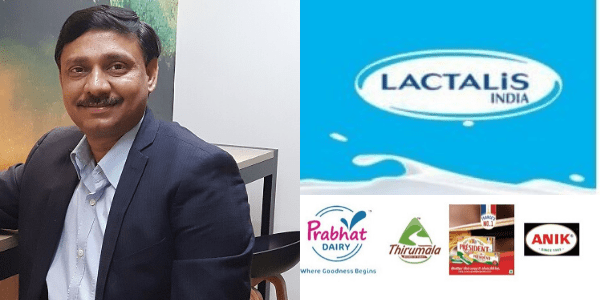 Naresh Kumar Puritipati has joined Lactalis India as the director-HR, taking over the mantle from Bruno Chevallier. Reporting to Rahul Kumar, MD, Lactalis India, Puritipati, in his new role, will be heading HR for the Lactalis India Group, which includes subsidiaries, such as Tirumala Milk Products, Anik industries and Prabhat Dairy.

Puritipati brings with him more than 24 years of experience, of which 19 were spent in the food and beverages sector. His expertise lies in talent management, people productivity, business HR, OD, and performance management. He went through his virtual on-boarding session on the May 2, and has effectively taken over the reins in June.

In his previous role, Puritipati was heading the human resources function at Spencer’s Retail as the CHRO, where he was responsible for attracting, retaining, developing, and engaging talent in the organisation. He officially left Spencer’s Retail on April 30.

Speaking to HRKatha, Puritipati says, “Before my retail stint, I worked with Hindustan Coca-Cola beverages where I gained extensive experience in both sales and manufacturing. Joining Lactalis India is more like going back to a similar set-up. I am very excited to be here and contribute to the growth of the company””

Puritipati began his career as a personnel and administration officer at Avanti Kopp Electricals in 1995. He then moved on to Heritage Foods as a senior executive for HR and administration in 1998, where he spent close to three years.

He joined Hindustan Coca-Cola beverages (HCCB) in 2000 as the Factory HR manager. Over the course of 12 years in the organisation, he kept on progressively occupying senior roles, finally ending up as zonal head for HR.

Thereafter he was handpicked for global roles such as being appointed the HR lead at Coca-Cola bottler Malaysia 2011, Country HR Director in 2013 based out of Yangon, Myanmar.

In Malaysia he helped develop an HR strategy for the sales and manufacturing department and spent close to eight months in this short-term assignment.

In Myanmar, he was responsible for overseeing the HR aspects for the sales and manufacturing departments, and reported directly to the global HR-head of the Coca-Cola Bottling Investment Group and CEO, Myanmar.

Again in 2014, he re-joined Hindustan Coca-Cola Beverages as the national head for organisation development and cadre building. Over the course of his many years in the organisation, he rose to occupy the position of HR head for integrated supply chain in 2018.

At HCCB, he was  responsible for end-to-end HR business functions for an employee base of 4500 permanent and + 5000 contingent workforce across 18 manufacturing plants, five Distribution centres, logistics and Corporate SC functions.

It was a year after his elevation at HCCB that he resigned and joined Spencer’s as the CHRO in 2019.

Puritipati has a master’s degree in human resource management and a PhD in the same subject— which he pursued during his tenure at HCCB— both from Andhra University.