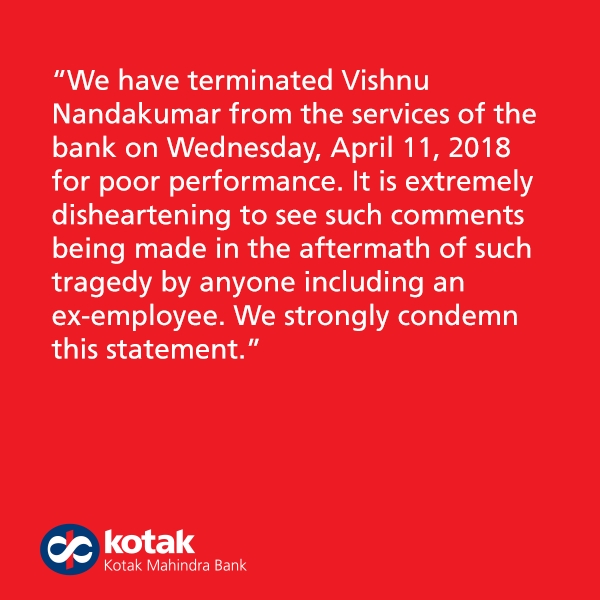 The assistant manager with the Kochi branch of Kotak Mahindra Bank had commented on social media justifying the gangrape and murder of an eight-year-old girl in Jammu and Kashmir’s Kathua.

Not only can employees help build and enhance the stature of a brand, they can also tarnish its image.

What they say and do on social media, even in their personal capacity, can affect the image of the brand.

An employee of Kotak Mahindra Bank—an assistant manager at its Kochi branch— has posted a comment on social media justifying the gangrape and murder of an eight-year-old girl in Jammu and Kashmir’s Kathua. He wrote “It is good that she (the rape victim) was killed now. Otherwise, she would have come as a bomb against India.”

This message created a lot of furor on social media and people started a hashtag campaign “#dismiss_your_manager”.

Though Kotak Mahindra claims that this employee was sacked only for non-performance, the truth is that the Bank took immediate action for the employee’s irresponsible and insensitive comment and sacked him. The campaign on social media also forced the Bank to do so.

The Bank’s notification on social media post the sacking reads, “We have terminated Vishnu Nandakumar from the services of the Bank on Wednesday, April 11, 2018 for poor performance. It is extremely disheartening to see such comments being made in the aftermath of such a tragedy by anyone, including an ex-employee. We strongly condemn the statement.”

Even globally, employers have taken strict action against employees for social media posts, especially when they affect the brand’s or company’s image. A Bank of America employee lost her job after she posted a racist rant on Facebook nearly two years ago.