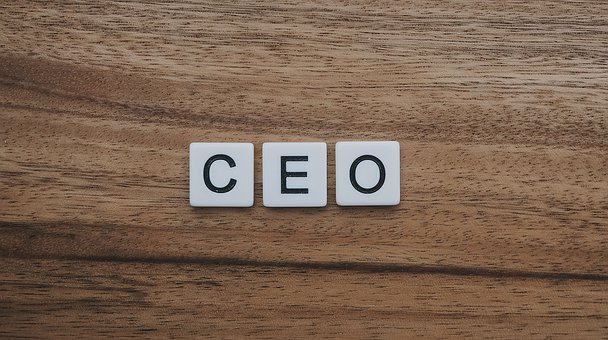 Technology has been continuously disrupting businesses around the world. Now, Indian CEOs have also begun to understand and leverage the potential of technological advancements, such as artificial intelligence (AI), cloud-based technology and other digital advancements.

According to KPMG’s ‘India CEO Outlook 2019: Agile or Irrelevant’ report, 92 per cent of CEOs expect significant return on investment (ROI) from the overall digital transformation programme in their organisations in the next three years. Moreover, there has been a 20 per cent increase in CEOs who expect significant ROI from AI systems, from 38 per cent to 58 per cent in the next three years.

With the digital transformation of companies, it is very much obvious that the workforce should also be upskilled to take advantage of the changes and advancements.

As the report suggests, many companies have diverted their capital investment to developing modern skills in the workforce and have started to move towards workforce 4.0.

Fifty-one per cent of CEOs in India are already planning to upskill more than half of their workforce in digital capabilities, such as advance visualisation and coding ability. 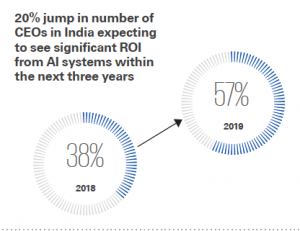 As per the survey, many CEOs in India and across the world, believe that technological advancements such as AI and robotics will further create more jobs for the people. Thirty-four per cent of Indian CEOs say that modernising the workforce by adopting lean, intelligent automation and skill-on-demand is the top strategy to make the workforce future ready.

The study also reveals that in India, 66 per cent CEOs make more capital investment in technology as compared to 34 per cent in workforce development.

This indicates that businesses will invest more in technology first and then look to upgrade their workforce to further leverage the true potential of the adopted technology.

But some of the global leaders have suggested that companies need to balance this process. You cannot progress simply by investing in technology without developing the people who will eventually help the organisation leverage the powers of that technology.

Markus Tacke, CEO of Siemens Gamesa, says, “Today’s organisations need to be fast-learning and fast-moving entities that adapt quickly from not just a technological point of view but also from a people’s point of view. Capabilities that were quite valuable 10 years ago remain reliable but need to be complemented with other capabilities. So, what companies need to do is invest in both in a balanced way.”

Another focus of CEOs is to nurture an agile and innovative culture in their organisations. About 80 per cent of the CEOs surveyed want to empower their employees to innovate without caring about the negative consequences.

Unfortunately, however, only 45 per cent of the CEOs surveyed believe that they have a culture of celebrating ‘fast-failing’ innovation.

Still, companies can create an innovative culture by making their leadership resilient, by constantly upskilling the workforce and also by aligning the functions of the front, middle and back offices. 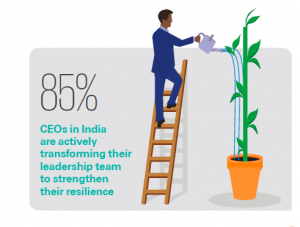 As per the survey, 85 per cent of CEOs in India are actively transforming their leadership teams to enhance their resilience. On the other hand, 77 per cent CEOs are working towards connecting the front, middle and back offices. The survey also reveals that two third of CEOs are personally focusing on greater cross-functional alignment.

Clearly, CEOs are now further understanding the potential of technology. They are showing an inclination to adopt new technology, while simultaneously upskilling the workforce to further take advantage AI systems and machine learning.

Annual productivity loss of $3.5 billion in Bangalore IT sector due...