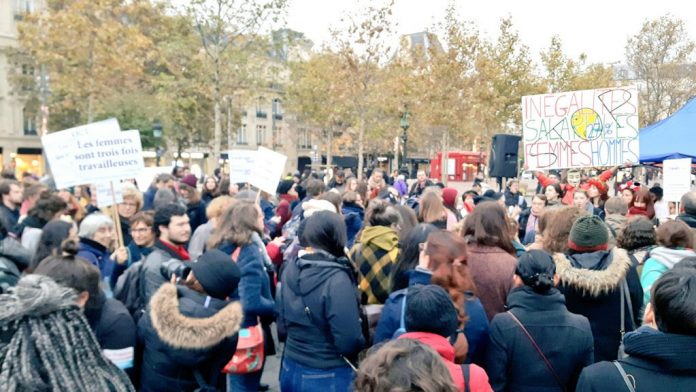 The time marks the moment at which they stopped getting paid for, in comparison to men.

What happened in Iceland a few days ago, has apparently invoked women across Europe to rethink their efforts for creating awareness around gender pay parity. Following the example set by Iceland, which has been protesting every year for the last 11 years, against gender pay gap, women across France left their offices at 4.34 p.m. on 7 November – the time at which they stopped getting paid for 2016, in comparison to men.

The mass walkout saw workers from all sectors take part in a new movement that is fighting to close the gender pay gap in the country. In fact, staff at some of Paris’s most high-profile political and cultural offices stopped work at 4.34 pm on November 7. The average French woman is paid 15.1 per cent less than a man, which means women effectively work 38.2 more days each year than men for the same salary. Some experts suggest that the global wage disparity will not disappear until 2186.

Although the intention of the activists was not to spark demonstrations with their call to protest, it reached two million people through the social media service, Thunderclap. However, the idea captured imaginations and sparked spontaneous street rallies. At Place de la République in central Paris, scores of women turned out, many with placards, to support the protest.

As a show of solidarity, at City Hall, Anne Hidalgo, the city’s first woman mayor, suspended a meeting of the city council at 4.34 p.m. Staff at the Musée d’Orsay and several newspapers, including Le Monde, stopped work and gathered for pictures. The education minister, Najat Belkacem, formerly minister for women’s rights, backed the strike. “The fight for pay equality involves the whole of society. We cannot wait until 2186,” she tweeted. There were many other high-profile organisations and leaders who supported the move.

According to the Eurostat figures, there are just under 13.8 million working women in France, making up 48 percent of the total workforce. The figures for 2014 show men’s salaries are about 15.1 per cent higher than women’s. On an average, across Europe, women earn 16.1 per cent less than men in equivalent jobs.

Les Glorieuses, the feminist newsletter that campaigned for women’s rights, urged all French women to take part in the protest. On the group’s Facebook page dedicated to the protest, there were calls for nationwide demonstrations including at Place de la République and in Lyon and Nantes. The group also called for a display of solidarity on social networks. Rebecca Amsellem, 28, the co-founder of Les Glorieuses, who spearheaded the campaign, expressed that the response had taken her by surprise.