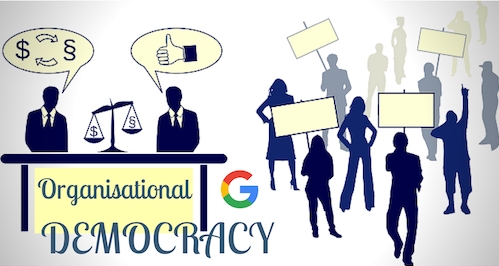 They voiced their demand for a role in evaluating company projects so that they do not end up as partners in any crime.

Google employees have done it again. They have proved that employees’ opinion comes before the stakeholders’. In fact, that’s how it should be. Although, it’s too early to say, democratisation of organisations is inevitable. Today, it’s happening at Google, but it will soon spread like fire.

When your creation can revolutionise the entire society, you do have to be responsible. That’s what the employees at Google have proved time and again. They have re-asserted that if they are instrumental in creating a product, they also have the right to learn how and where the product will be used, and also ensure it follows the ethical and moral way. The Company may own the product, but the creator’s rights can’t be taken away. The staff have proved that people who make technology have more power to shape corporate decisions than even shareholders possess.

Even in the past, Google employees forced the Company to let off a Pentagon deal because they did not want their creation to be associated with the ‘business of war’ directly or indirectly.

Now, around 1,400 Google employees have sent a signed petition to the management with four specific demands that will ensure that workers will have a formal role in corporate decision making. They want the Company:

1. to create a structure to allow rank-and-file employees to review ethical issues in Company projects.

2. to appoint an ombudsman to oversee the ethics review process, with input from employees on who fills the position.

3. to have a plan in place to ensure it is transparent with employees about the purpose of the technology Google is developing, so that employees can make informed choices about the ethical implications of the work they do.

4. to publish ethical assessments of their projects, such as Dragonfly, and to communicate regularly with employees about issues of concern.

The management is yet to respond to these specific demands. However, on Dragonfly, Google’s CEO, Sundar Pichai has clarified during a weekly staff meeting, that the project for China is merely in the ‘exploratory’ stage —a sign that he has already started getting defensive.

A former Google engineer, Brandon Downey, who had a role in developing the Company’s first censorship tool, wrote, “If we build a tool and give it to people who are hurting other people with it, it is our job to try to stop it, or at least, not help it.”

“If technology is a tool, then it means the people making that tool have a responsibility to curb their tool’s misuse by playing a role in the decisions regarding its usage. And if the people who are the leaders of the company don’t believe this, they should hear it in plainer and clearer terms: namely, you do not become one of the largest companies in the history of capitalism without the assistance of the workers making those tools,” he further wrote.

If Google executives accept the demands, it will reflect a major shift in corporate priorities. The employees have proved that they can force even one of the most powerful companies in the world to put ethics before shareholder value, and set a precedence of why workers need an official voice in strategic decisions.

If it happens at Google, others will no doubt follow suit.